As a teacher of Canadian history it falls to me every day to see how I can make history real and come to life for my students. Our Canadian heritage often gets under-rated and unfairly tagged as boring and humdrum. To combat this, I need strong visual imagery that would allow my students to picture the past. I could use still images researched from the Internet, in the hope that the use of this medium can somehow jar an interested glance or two from my class; or I can read them historical fiction to let their minds’ eyes paint a contextual framework for understanding. Whatever way I choose to do it, it is essential that I convey a sense of visual realism … which is difficult to achieve in teaching Canadian history.

However, thanks to Renegade Arts & Entertainment’s continuation of the Loxley’s saga in The Loxleys and Confederation, it just got a little easier.

While there are other ways to teach history, I recognize that we live in a visually dominated society. The greatest challenge in teaching Canadian History to a generation that has grown up with swipe screens and video-on-demand is to visualize the history that has gone before us.

Comics can introduce content in a primary visual way that is both powerful and relevant. They can make stories, particularly historical ones, significant and interesting. The visual vibrancy of comics becomes a necessary feature in communicating the events of the past and their relevancy to a young modern audience.

Created by the team of Mark Zuehlke, Claude St. Aubin, Alexander Finbow; Todd Klein, Chris Chuckry and Niigaanwewidam James Sinclair, the purpose behind The Loxleys and Confederation is more than just a Canadian content graphic novel. There is an objective to convey a personal appreciation of history in this book. By making this story personally relatable and examining the most fundamentally significant event in Canadian history through the perspective of a family that has seen the evolution of the Canadian colonies from their experiences in during the War of 1812 (as chronicled in The Loxleys and the War of 1812 by Alan Grant and Lovern Kindzierski), readers can appreciate Canadian history from a thoroughly amenable source. 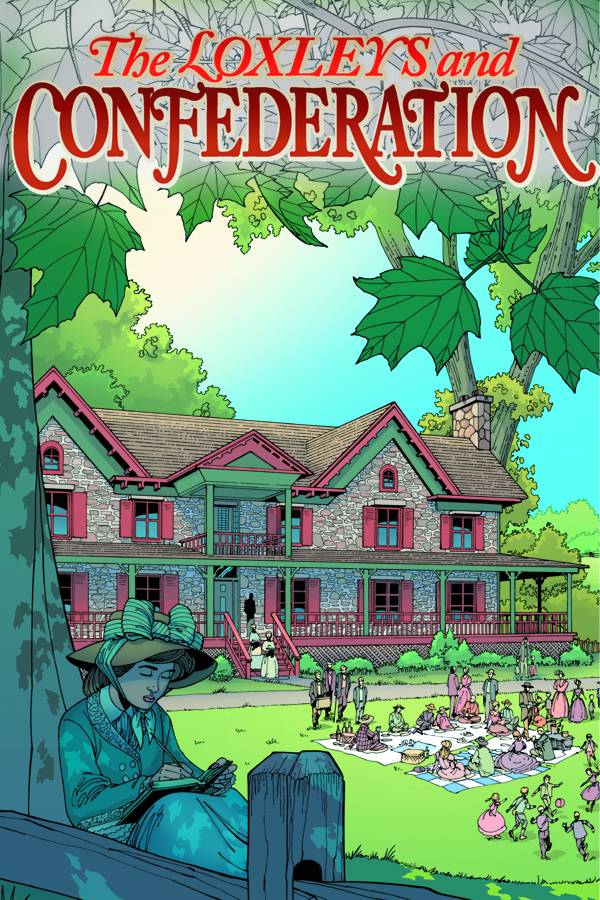 The causes of Confederation can include American expansionism (Manifest Destiny), the need to create a stronger economic union, the political dissension between Canada West and Canada East (aka The United Province of Canada) and the recognition for Canada to thrive, better communications and transportation in the form of a continental railway had to exist.

All of these underlying causes are wonderfully explained and narrated by Loxley family members who are established as stakeholders in this grand exploit from their previous appearances in history. Diarist Ruth Loxley accompanies the fathers of Confederation in their journey to Charlottetown to advocate for national unity. A wonderful detail that is often forgotten in our history is the near-simultaneous meeting of the Atlantic Colonies discussing a possible economic Maritime union. This event precipitated the eventual Canadian Confederation and is delightfully peppered by interesting trivia like the arrival of the Olympic Circus, the forced accommodation of the Continental Canadian delegation on board their own ship because of a lack of hotels on Prince Edward Island and individual contributory efforts of John A. MacDonald, Darcy McGee, George Etienne-Cartier and George Brown. It is a History teacher’s joy to see these prominent figures in Canadian history come to life.

Historical accuracy is enhanced by the entertaining contextualization of the events of this time that occurred elsewhere. The American Civil War came to an end on the threshold of Canadian Confederation. The British North American need to unite in the face of such a numerically superior potential adversary fresh from war is also often forgotten about in recollecting Canadian history.

Additionally, the assassination of Abraham Lincoln had more than just an American consequence. Lincoln’s influence was a sobering one on the expansionistic tendencies of the American Congress. His absence allowed Congress to pass economic resolutions that ended economic relationships with British North America and Claude St. Aubin’s wonderful portraits of American firebrands calling for the dissolution of the reciprocity agreements and effectively starving the Canadians effectively summarizes the charges against the colonies and the American mindset at the time. This is history thoroughly visualized.

The Irish Fenian threat was also a danger that the embryonic nation faced. A unified Canada was the only hope that it had to protect itself from American Irish sympathetic to the cause of an Ireland independent from British rule. They may not have been able to strike at the British Empire directly, so attacking British North America was the next best thing. However, this only galvanized the Canadian sense of unity in the face of terrorism and Zeuhlke’s battle accounts are dynamically realistic and accurate. 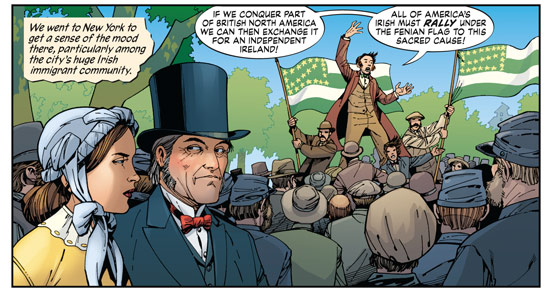 What also stands out in this book is the inclusion of other voices that are often given their fair due in the formation of Canada. The heartfelt speech of Ojibwe missionary known as John Sunday – Shawundais, who described the plight of the Ojibwe whose lands were  flooded by the arrival of settlers and experienced starvation is a tale of neglectful abdication of responsibility to a neighbor. The involvement of the Native Canadian in our history is given voice by the works of Associate Professor of Native Studies (University of Manitoba) Niigaanwewidam James Sinclair. Canada is a creation of a multitude of different peoples and the contributions of our native brothers and sisters is too rich to be overlooked. 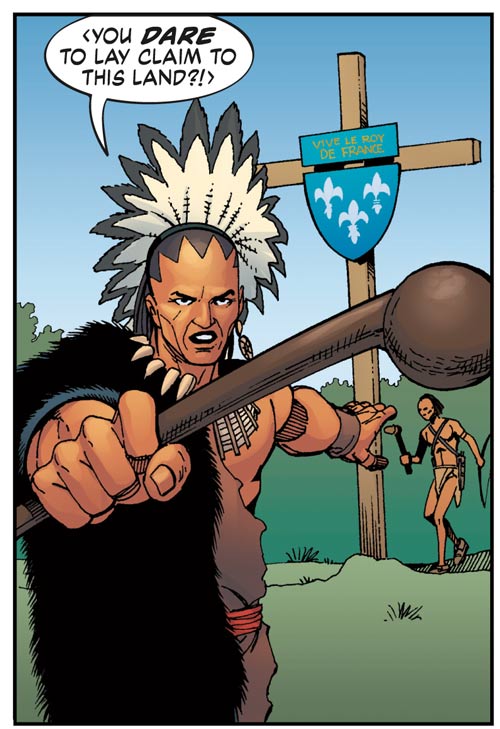 St. Aubin’s artwork is fresh, clean and finely detailed, that provides a clear image of 19th century Canada. With vibrant colours by Chris Chuckry, this is the type of visualization that is needed to properly and accurately create a picture of Canadian history.

This is the graphic novel that should be present in every school library. It is difficult to instill a desire in a student to know more history without a clear picture of what it is he or she is studying. Students need to see real people in relatable situations in order to make connections between the past and the present; with this book that can happen.

The Loxleys and Confederation make a difficult subject clear, relevant and with such great art: cool. It’s a perfect teacher’s resource and it’s a great piece of comic art that tells a poignant and dramatic story that allows a reader to see why Canada is such a great country an how its history should be envisioned.