The Man in the High Castle – Review 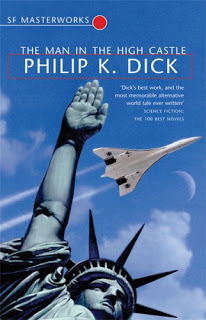 Philip K. Dick’s The Man in the High Castle presents an alternative reality in which the Axis powers won World War II and divided most of the world, including the United States, between them.

The Nazis quite predictably take the Holocaust to even greater extremes, going so far as to wipe out all of Africa. The Japanese rule more benignly—much like the Americans, British and French did in their real-life occupation of Japan and Germany (Soviet occupation of eastern Europe was of course much harsher and long-lasting). And yet, Japanese dominion in Dick’s world instills an entirely-alien way of thinking in those American living under it, one that leaves the conquered Americans with a subtle yet pervasive feeling of inferiority.

I imagine this must have been how the real-life Japanese felt under American occupation and after. This radical restructuring of society and even ways of thinking must have pervaded nearly every element of daily life, just as it does for the Americans in The Man in the High Castle.

The most distinctive feature of the novel is the story-within-a-story, an alternate history in which the Allies win World War II. Interestingly, this version differs considerably from the real-life Allied victory. But the book nevertheless inspires the Americans to consider a different reality, providing a glimmer of hope, even as the Nazis hunt down the author.

In addition to this book, other works of culture play an important role in Dick’s world. The Japanese occupiers collect American artifacts like Old West-era firearms, prompting an illicit trade in counterfeit antiquities. (This mirrors the real-world trade in counterfeit samurai swords.) Artists, dealers and collectors feature prominently in The Man in the High Castle, where culture is more important than politics.