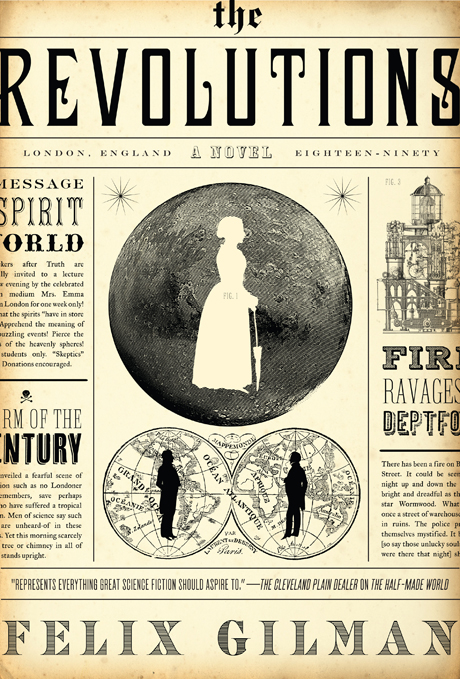 Gilman’s latest novel, The Revolutions, is an intriguing blend of steampunk sci-fi/fantasy with dabbling in Victorian-era occult. Many novels that have tried to straddle the sci-fi/fantasy division end up simultaneously irritating the hard-core sci-fi fans with a complete abandonment of all things plausible and discombobulating the fantasy lovers by shoving them off of the more terra firma-based settings into the vacuum of space. The Revolutions, however, does neither, and succeeds in presenting an absorbing tale of planetary explanation via the invocation of the arcane.

The tale begins with a love affair born from survivors of a seemingly natural disaster. Or was the great storm something more than it seems?  Our hero and heroine Arthur and Josephine, who are possessed of preternatural gifts, are inexorably drawn into web of degenerate explorers probing the occult. These singularly affluent adventurers are pioneering the usage of turn-of-the-century age machinery harnessing the power of low-level clairvoyance.

The machinery performs calculations related to Newtonian orbits in a sort of artificial intelligence fashion, which enable out-of-body expeditions to other planets. The planets themselves are fashioned as sorts of altered states of consciousness, both higher or lower depending on whether one is moving towards or away from the sun. During one of these explorations, Josephine consciousness is left stranded on Mars and Arthur seeks to manipulate affairs from within the society of adventurers to effect her rescue.

The story is well-paced, captivating, and possessed with a wonderful sense of imagination. In particular, the alternate history of Mars and the Martian society is quite well drawn and very inventive. The characters are also well-varied and dimensional on both the heroic and villainous sides. The main aspect I felt the book was lacking was clearly connected threads between individual’s motives and actions.

In particular, the drivers behind the society of explorers themselves were notably opaque. Why did they want to take these considerable risks into the unknown?  What were their mysterious sources of funding?  Who were these people any way and where did they come from?  I thought the story left far too many of these questions dangling with only partial solutions. Even Arthur, the character with the most coherent inducement of love seems to inexplicably wax on and off in his passion. In some ways we’re left a bit befuddled, as though we’d accidently chosen to play “Revolution 9” instead of “Revolution 1” from The Beatles’ The White Album.