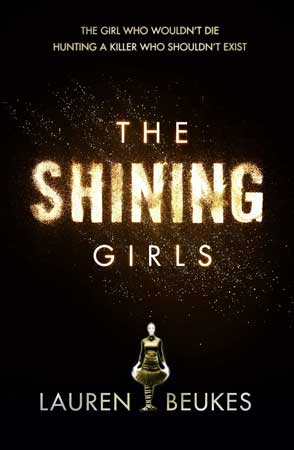 The Shining Girls is the third novel from South African writer Lauren Beukes, whose previous novel, Zoo City, won the 2011 Arthur C. Clarke award.  The basic framework of the novel, set in Chicago, is fairly mainstream Patricia Cornwell-style bestseller thriller fiction: serial killer with a penchant for disemboweling hunts down girls he deems special, or “shining.”  One of his victims inadvertently survives thanks to help from her brave, faithful dog she makes the gutsy (pun intended) decision to go after her aspirant murderer.

What keeps this book from being just another popular paperback novel on the rack at the airport is the addition of a dash of Stephen King-esque supernatural.  You see, this serial killer, while just a garden-variety maleficent, has been granted access by an unknown entity to a time-travelling house.  The murders have occurred during widely spaced eras, and are linked together through items transplanted from one time to another.  The house itself initially exists in an almost quantum mechanical state of “no time” where the murders both have and have not already taken place, and serves as a repository of these tokens.  The killer feels himself drawn (by the house, perhaps) to a particular object, visits the appropriate time, dispatches him victims, collects the requisite item, and returns, collapsing the superposition of already occurred/not yet happened states for the murder to the past.  Schrödinger’s cat would have felt right at home here.

I truly enjoyed the idea of this sci-fi augmentation to what was a decently written thriller.  I had trouble, though, with the implementation of the “victim who survives and brings her killer to justice” aspect. A story that involves substantial, non-linear movements in time almost always requires a great deal of attention to follow.  For example, I can remember reading Catch-22 in high school and one of the class exercises was to learn how to piece together a time table from the highly fragmented story action.  The author of The Shining Girls has kindly provided the reader with chapter headings to help place the action in the proper period.  Our casualty-turned-detective protagonist, of course, has no such help, yet somehow manages to pinpoint the murderer’s widely scattered victims across nearly a century of Chicago murders without a truly distinctive MO.  Even more puzzling, the author has chosen to make the present time for the protagonist in the early 90s, so she has no access to a decent Internet or Google search mechanism that might have made her task somewhat believable.  In the end, the brilliant flash of insight that puts the story together for our brave protagonist comes after smoking a joint.  And here, you were told that weed causes fuzzy thinking. Take that Reefer Madness! [subscribe2]