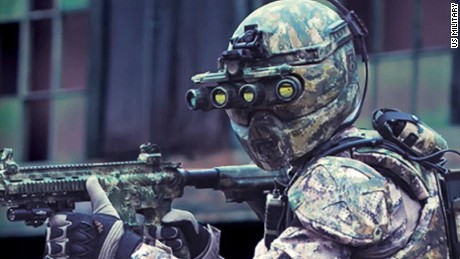 (CNN) After an American commando died kicking in a door during a raid in Afghanistan, the top commander of U.S. Special Operations vowed to prevent similar tragedies.

Two years later, the U.S. military is closer than ever to putting a real-life Iron Man on the front lines — or at least something that closely mirrors the popular Marvel superhero’s mechanized suit of armor.

Unlike Hollywood’s, the suit won’t give its operator the ability to fly, but the real-life body armor may have one leg up on the fictional version: The military’s suit will be made of liquid armor that can solidify on command.

Fitted with the protective gear — the Tactical Assault Light Operator Suit, or TALOS — troops would be more lethal and better protected, particularly the vulnerable first soldier to breach a compound.

An amalgam of academics, defense industry types and Pentagon personnel are trying to fine-tune the battery-powered exoskeleton, which would reduce strain on the body, provide superior ballistic protection and in-helmet technologies to boost communications and visibility.