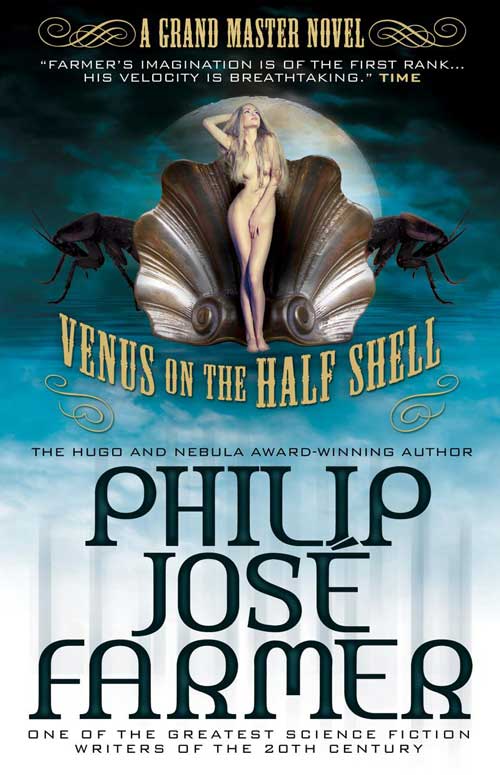 Philip José Farmer was a Hugo and Nebula award-winning writer from the Midwest, whose best know works, the Riverworld series was published in the 70s and 80s. Famer’s claims to fame were in pioneering the addition of sexual themes to the genre of science fiction, and also his tendency to borrow fictional characters and themes from other books and blend them into his own stories. Venus on the Half Shell combines both of these elements in a romp through the galaxy to seek an answer to the ponderous question, “Why?” with an contrastingly light-hearted manner.

Venus was originally published in 1974 under the name of Kilgore Trout. Vonnegut fans will recognize the name as a fictional author who appears in many of his books. Farmer actually hatched the concept for his novel from a scene in God Bless You, Mr. Rosewater, where a character is paging through one of Trout’s books in the pornography section of a bookstore. He wrote Venus, with permission, as a tribute to Vonnegut and with his penchant for resuscitating fictional characters, mingled with the flair of a practical joker, published it as Trout. This prompted a wide range of reactions, from the admiring “Brilliant!” to the befuddled, head-scratching “What the…?” all the way to indignant outrage.

This publication by Titan Books under Farmer’s own byline with plenty of prefaces and afterwords is an attempt by the author’s family trust to set the record straight, and have the novel appreciated for the story without the unwelcome garnish of controversy.

The tale opens on far future earth with a picnic, attended by our protagonist Simon, dissolving into a predictable rainy conclusion. The storm quickly develops into an apocalyptic deluge- turns out the flood of biblical fame was actual caused by the periodic janitorial visitation of an alien race called the Hoonhors, who knew?

Anyway, Simon manages to survive in a found spaceship, picks up an owl and a dog for companions on Mt. Ararat and, sobered by the destruction, sets off into the universe to find life’s meaning. As an aside, aficionados of Douglas Adams may be hearing a chord of familiarity here, but actually Venus predates Hitchhiker’s Guide and thus might actually have been a source of inspiration.

Simon first stop is Shaltoon, a planet of libidinous cat-like people, where he gleefully participates in their consummate holiday “Shag Day” with the Queen. “When in Rome…” seems to be the operative imperative here. Summarily refreshed, but no closer to understanding, Simon moves on to another planet, Gifford, where a vicious battle of the sexes rages between the earth-bound females and the zeppelin-like males. It is here that Simon meets his Venus, a female robot named Chworktap who is described as a visual upgrade to Botticelli’s rendition (perhaps her left nipple is more naturally placed?). Chworktap becomes Simon’s lover and companion and accompanies him on his quest for enlightenment.

The story continues along this vein of imaginative encounters with a variety of fanciful aliens, all of whom are self-contented with their knowledge of the truth, but continuously fail to satisfy Simon’s needs.

The story was fun to read, and very interesting and pivotal from a perspective of the history of science fiction. I must admit, though, that from a feminine perspective much of the sex smacked of immature, Playboy-under-the-mattress style, adolescent male fantasy. At the end of the day, Farmer’s quest for erudition bore more than a passing resemblance to a sci-fi version of Erica Jong’s search for the “ultimate zip-less f**k” in Fear of Flying.