It’s a short review list this week. While this can be a good thing – an active life-style combined with the responsibilities of a family and full-time job certainly take precedence over the joy of comic reading; it’s also a bad thing in that it certainly makes you think about a comic title’s ability to sustain its audience over a long duration.

The comics on this week’s list are either all new titles or have a short run. In terms of a long-running title like the X-Men (in various incarnations) these titles have managed to continue by ending and re-starting themselves. The same applies to Marvel’s Avenger titles. In DC’s case, they re-started the entire universe and are now presently looking to modify it even further with the introduction of their Convergence event.

1963 saw the introduction of a shared universe in which comic heroes share existence. That was Stan Lee’s contribution to comic publishing and arguably, it has been the successful model for the past 50 years. Even the Distinguished Competition saw fit to emulate this concept and followed suit with their own heroic adventures. In short, it worked very well as it allowed for cross-overs, cameos and spin-offs galore. It still does.

Today, other comic companies like Image, IDW and Dark Horse create stand-alone titles that work independently of each other and while individually these companies don’t have the same market share as the larger two, they also don’t have the same history. Together they make up roughly the remaining third of the leftover market. For companies that are each, at most, 25 years old, this is still an astonishing accomplishment and hints at the changing shape of the comics industry in the years to come.

Do comic readers care about the continuum of a shared universe anymore? Was Jim Shooter’s New Universe introduced in the mid-1980’s years ahead of its time? Readers of the other companies don’t seem to mind and the quality of comics like Hellboy, Lazarus and the various Star Trek titles that IDW puts out every month are sophisticated and high caliber.

Still … I would love to see the Rat Queens show up in an issue of Reyn.

Let’s look at the titles.

To be honest, I have always hated Episodes 1,2, & 3 – as any decent Star Wars fan does. So I was not intending on enjoying this fourth Star Wars title from Marvel. I was expecting to simply suffer for my craft in order to bring you, my loyal readers, a professional a review as possible.

However, I loved it.

This comic takes place in a retrospective of Jedi Padawan Caleb Dume, now known as Kanan Jarrus, as he bands together with other clusters of rebels who oppose the Empire. In this issue, we see his origins immediately before the events of Palpatine’s infamous Order 66. I have to say, it was actually engaging and with its roots so closely tied to Episodes 4,5, & 6, it made the events of the Clone Wars more palatable.

It wasn’t the best of the recent Marvel Star Wars comics but in my eyes it actually accomplished the impossible: making anything previous to A NEW HOPE enjoyable. The art is clear and solid and the writing is engaging. This was a really good comic. 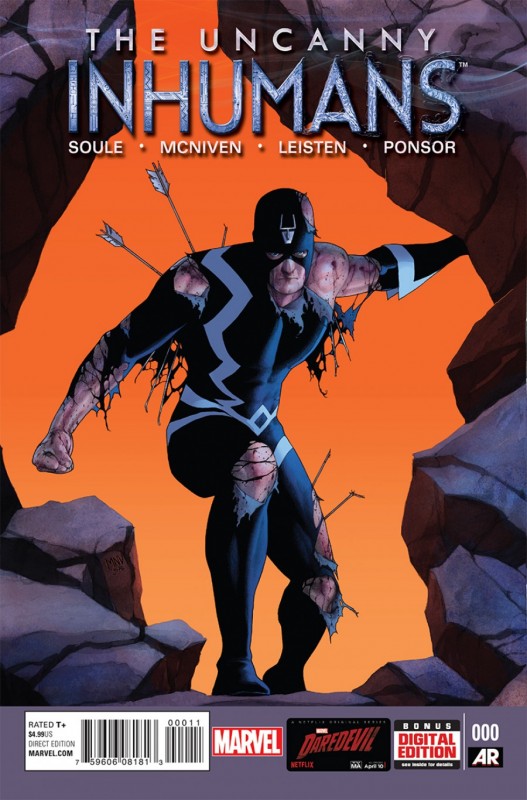 Again, not a big fan of the Inhumans. In fact, using them as a basis for the Marvel’s Agents of SHIELD television show wasn’t really a winning draw in my book. Even the recent foray of attempting to bring them in Marvel’s “cosmic” line of adventures wasn’t even that great. To be frank, I’ve always believed that the Inhumans were best left on their mountain kingdom, hidden away from the rest of the world and the Marvel universe.

Well, I can’t say that I enjoyed the extra story at the end of the comic (Iso and Flint); I found it a little pointless and trite. However, I can honestly say that I just gained a new respect for Blakagar Boltogon, former King of the Inhumans. I also just realized what an exceptional writer Charles Soule is. Combines with Steve McNiven’s penciling … what an awesome combination. I was really pleased to add this Marvel title to my pick list. Topping it off, an encounter with my favourite of villains: Kang the Conqueror just made this book a major plus for me. I’d definitely recommend this one if you’re looking for new titles to add to your lists. 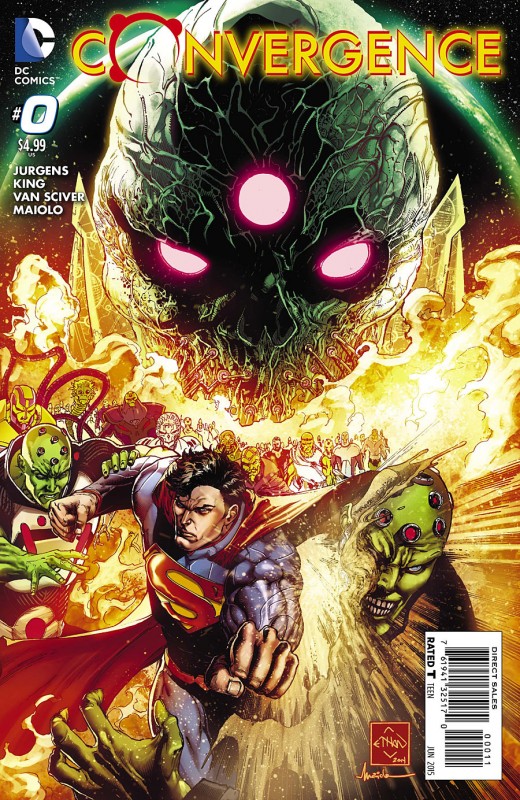 I had to hold my breath before delving into this one. I don’t know what DC can do to recover from the massively controversial New 52 reboot and reconcile it with almost 50 years of established canonical history. Is this a generational thing? If so, then how does DC deal with the mainstay of its fans aging into a state of mind where they expect to tell their kids about the awesomely cool history they grew up with?

As a teacher who brings comics into his classroom, I am used to explaining the origins of different comics to my students who read the ten long boxes of bronze/silver age comics I have stacked in at the forefront of my room. It’s a really cool experience to listen to my students criticize the decisions of the DC editors who decide the future of their properties.

However, maybe Convergence will rescue these properties and DC will be able to reconcile all of these different multiple universes? Of course, my problem with this mentality is rooted in the one word question: why?

I loved the different universes. I really enjoyed the cross-over events and the fact that World War II heroes could continue in another universe while modern heroes could also have their hey-day. Multiple universes was one of the reasons why I bought DC comics and I have really fond memories of the Per Degaton crossover events involving the JSA, JLA and the All-Star Squadron. These were awesomely entertaining experiences that showed that multiple universes worked and it was a hallmark feature that distinguished DC from Marvel.

I liked Convergence but I have to say, that I hope that this doesn’t spell the end of the various universes and I sincerely hope that DC finds a way to integrate them all into some sort of workable publishing format because turning its back on established canon was a flawed mistake. In my mind, you can’t segregate your fans and cater to only one established fan base. Make more of the universes available, and that’s what I hope that Convergence will bring to bear.

I will stop ranting now and choose my pick of the week from my too-small list.

I have to go with:

Though Inhumans was an incredible foray – and definitely one of my additions to my pull list – the scope of DC’s Convergence is a massive one. It’s risky but no reward came without risk and I have to say that I am lured by the chance of the rents in DC’s universe repaired.  If they manage to reconcile all of the universes they could restore the continuum and open the future to the same sorts of crossover event and parallel universe stories I grew up reading. This was why I loved DC as an adolescent and I want the kid readers of today to enjoy the same experience. This is more than a redemption … it’s a restoration to a classic age. There’s a lot riding on this book and I have to acknowledge the stakes here in deciding the pick of the week.