The immediacy of comics is a feature that is unique only to this medium. Because they are serialized, there is a greater sense of urgency to read the continuing adventures of your favourite super-group or hero. Because it is actually possible to read a complete story from start to finish in twenty-two pages, there is a greater sense of reward for such a short investment of time, compared to reading a novel. Plus, the visual aspect of the storytelling is a joy to behold – when the art is expertly delivered.

Reading comics is one of my favourite pastimes that I actually schedule on my calendar to do every week.

The downside to comics is that sometimes this immediacy works against the appreciation of this type of storytelling. Take Image Comics East of West for example. The episodic nature of the story in no way supports its quality. You are only treated to a fraction of how great the characters are; the nature of the setting, and very little opportunity to dwell upon any of the back-story. At times, the medium doesn’t do the story justice.

Of course, this is when movie deals are made, right?

Still, you are gifted with the chance to glimpse a portion of this amazing world, in addition to the hundreds of other world settings that comic creators provide for us. Even if you only get to see them twenty-two pages or more at a time, at least the chance is there for you to allow a tiny bit of fantasy to enter your own personal world.

This is a harsh world in which we live. Rest assured I am not blind to its positive side, but life can be harsh. We have debts to pay, confrontations in the work place to manage, loved ones who depend upon us for the necessities of life or for motivation to simply get up in the morning. There is only so much reality we can take. There is a place for fantasy, yet the constraints of our lives require that we can only have the room for it at certain points of the week.

I need my two hours every Wednesday evening to escape into fantasy, so that my reality isn’t unbearable.

Let’s take a look at the amazing slices of fantasy that have been served up for us this week. 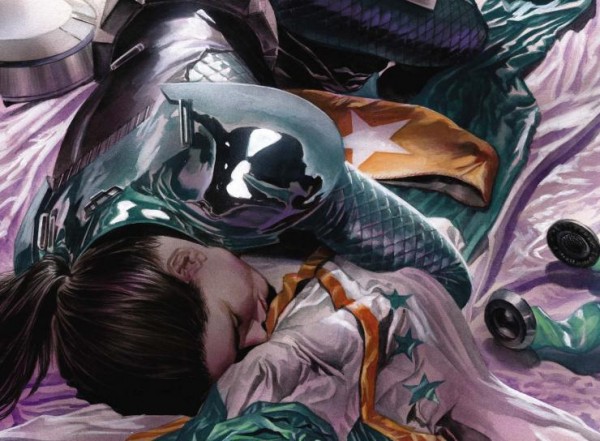 Kurt Busiek likes to get inside his characters’ heads and show us what’s going on. This is the last issue in the story arc “The End of the Trail” where we see exactly what it is that drives Quarrel. It’s not the rescue attempt to save Crackerjack that gets me; it’s her visit with her estranged father that really makes me sit up and pay attention to this hero. Sometimes the most challenging things in life are relationships and that’s the focus of Astro City: making super-heroes relatable to regular folks like you and me.

Great comic – if you’re not already reading it. It makes me think about the relationships in my life and how I can improve them. 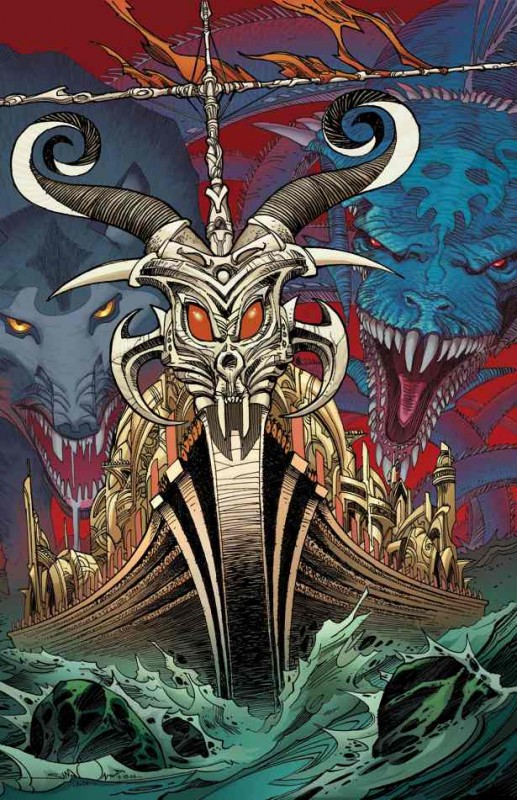 Simply amazing. We are given a greater degree of insight into the Stone God’s personality in this issue. Thankfully, there is more to this story than conjecture and implications. I think this is the first issue where we are actually approaching the meat of the story and the nature of the Aesir, long forgotten on this revised version of the Norse cosmology, is finally beginning to come to light.

I need more. Simonson’s vision is truly unique but I find that I’m unsatisfied with the amount of quantity served up in these portions and I want more. Is this addiction or am I simply a glutton? Whatever it is, this book is just an amazing creation that I am impatient for the next issue to arrive. Seriously… I’m bad-tempered and just over-all grumpy after I finish reading this book.

Yeah, I think it’s an addiction. 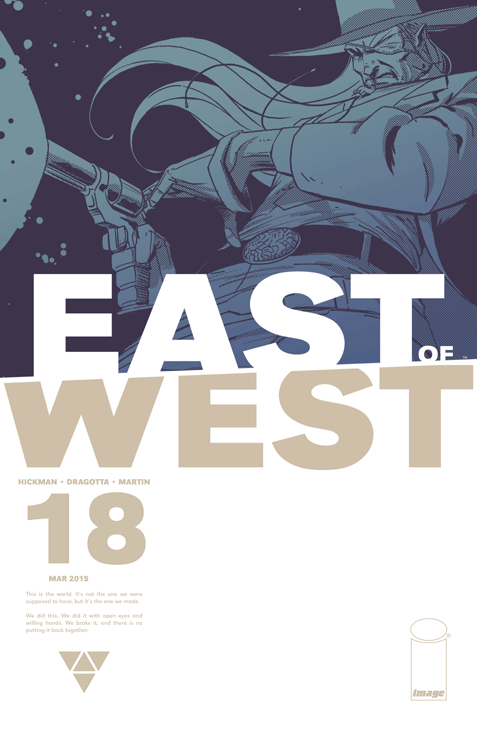 Again … another title that I can’t get enough of. As I prefaced in my earlier comments, this is a book that is staggering when you consider the amount of world-building that went into its creation. It wasn’t enough to simply divide the United States into a dystopian state, but to create five different dystopian states from its ruins. The biblical overtones mixed with the creative re-imaginings of various social and political aspects of contemporary American society in the telling of this story are nothing short of genius.

In this issue, we see Babylon – the Great Beast – lulled into his role as the great devourer of ancient prophecy. His parents search for him in order to halt this prophecy from halt, but the combined technological and poetic way in which he is beguiled just astound me in its creative artistry. Just an amazing story that I can’t wait for to come out in hardcover in order to appreciate the whole story in its entirety. 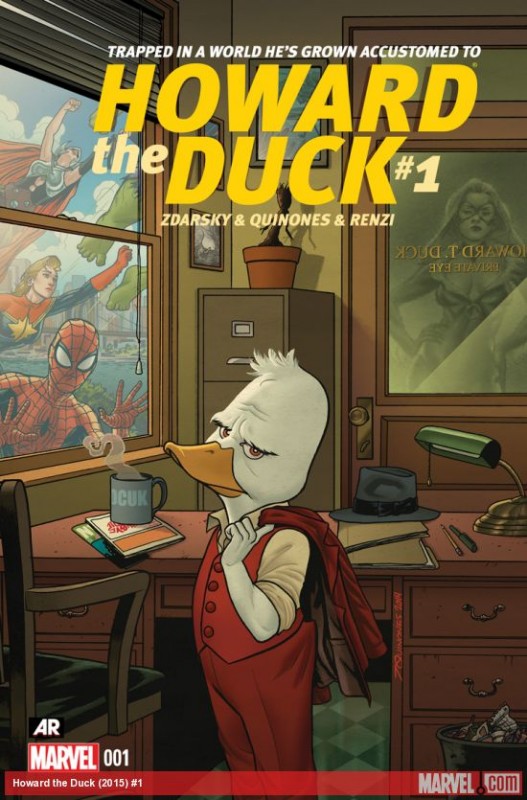 I was very curious about this one. You see, despite his outrageous aspect, in the 1970’s Steve Gerber actually managed to create an iconic character that actually communicated a message. Howard the Duck stood for something. Whether it was a not-so-thinly veiled scathing criticism against the establishment or one that was aimed at Marvel Comics itself, Howard wasn’t just a story – he was a metaphor.

I think that’s what’s missing from Zdarsky’s Howard. This is a zany story with humour and repartee, but Howard basically bounces from guest hero to hero, following a pretty weak plot to recover a necklace in his capacity as a private investigator. Zdarsky doesn’t really go into too much detail about where Howard comes from, other than a quick blurb about falling through the nexus of all realities. It was quick and simply throws the duck into the mix.

What didn’t sit too well with me about this book is that everything seemed contrived: Howard happens to be on the earth for a couple of months and yet he is an already established private detective with a bad relationship with the police. He happens to share the building with She-Hulk’s law practice and is able to contact Spider-Man and discover the Black Cat’s lair within a matter of frames.

Sad to say, my curiosity was abated, but not in a good way. This book failed to meet its mark with me. Could have been better, but at least it was an attempt to resurrect a truly whacky property and bring it to the forefront once again.

I missed Beverly though. 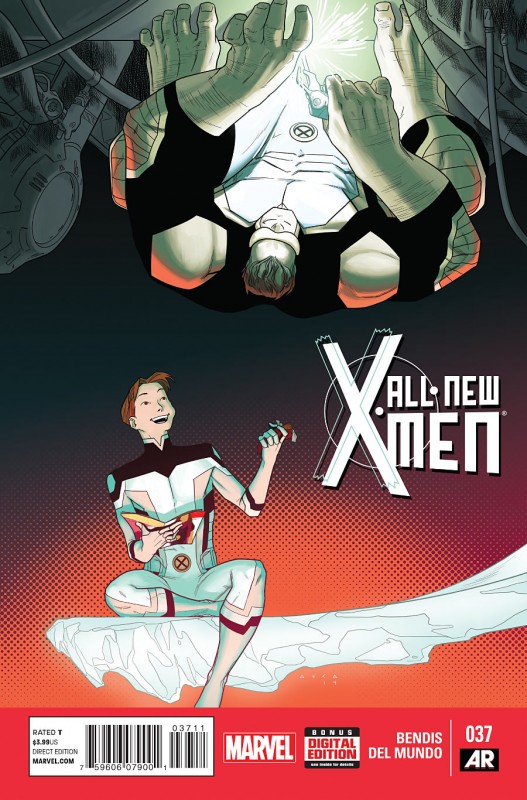 Sigh … but this actually wasn’t a bad little story. Essentially the White Queen takes the fledgling, time-displaced Jean Grey and puts her in the back alleys of Madripoor for a field-training exercise. As a one-shot, it wasn’t bad… wasn’t great, but it had a slight amount of pathos that any fan of Emma Frost would have enjoyed. 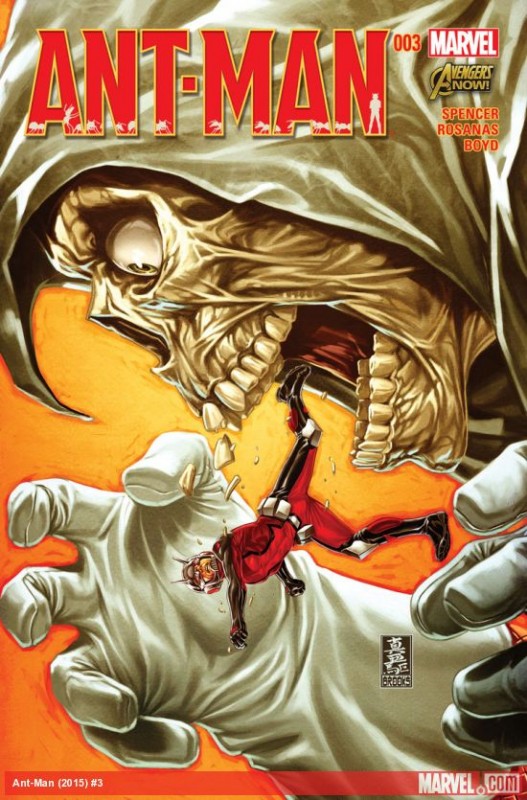 Nick Spencer has the right amount of dry wit and domestic humour mixed in with the fact that our hapless neophyte small-business owner now has an arch-enemy in … The Taskmaster.

… Or at least he thinks so.

The dialogue is pretty good in this book and I laughed aloud quite a few times, distracting me away from the stressors in my life. This might just be Marvel’s next sleeper-hit. It’s a really good book that isn’t getting a lot of attention. Someone over at Marvel needs to wake up and give it some more love. 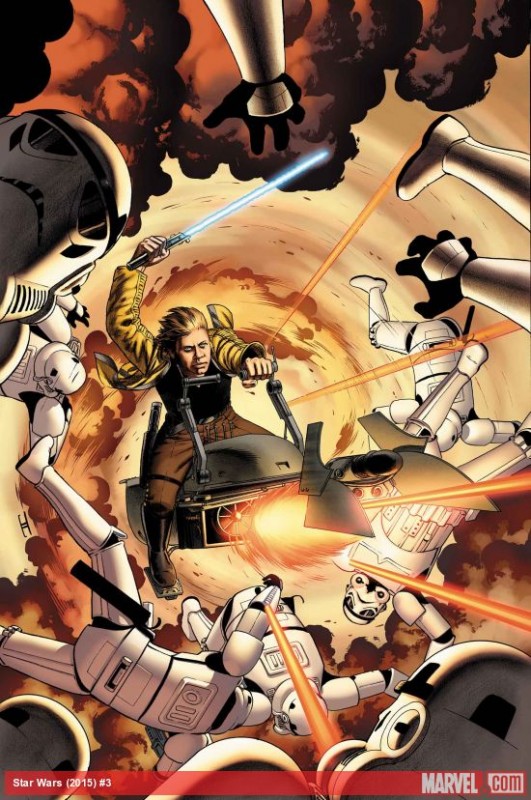 Instant hit. An awesome conclusion to an arc in which the rebels under the leadership of Princess Leia manage an assault on a weapons manufacturing facility. What’s really cool about this story is that it capitalizes on the unknown relationship between Luke and Vader and creates the beginning of his interest in the pilot who destroyed the Death Star.

We also see the development of Luke’s character – not just into an initiate Jedi Knight, but as an adventurer and hero. In short, we see him beginning to develop the experience he shows in Episodes V and VI. Disney and Marvel have a very successful collaboration here and this book is truly the best out of the other Star Wars offerings they have managed to come up with.

The winning choice this week definitely has to be:

Remember when I was talking about fantasy earlier? It isn’t just readers who feel the need to escape into a good story but creators must as well. This is a unique re-visitation of the Norse legends in a manner done by a true student of them. I have always admired Walt Simonson for his insistence of actual Nordic detail in his Thor stories. I was fortunate enough to be able to tell him that his rendition of Thor was partly responsible for my interest in Anglo-Saxon studies at university.

Simonson’s Ragnarok is a post-apocalyptic rendition of the cosmos after the Twilight of the Gods. Humans and Dark Elves along with dwarves and trolls all share the same realm now that the World Tree in which the Nine Realms are branched has been sundered. It is a truly unique and innovative imagining of these legends and makes them appealing to a new audience.

Simonson is a master creator, a student of mythology, but incredibly humble in person. He is also a truly kind and noble spirit without pretentions. From this source, a pure and wondrous story has emerged and if Simonson’s “hondescreaft” is any reflection of his personality, then only good things can come out of this storytelling. Like I said before – I need more.

But isn’t that the case with good things? You see, it’s not just escapism that we need, but we also need to gravitate to those things that are good; and this is good. It is storytelling at its finest; it is artistry to an exemplary degree and it is fantasy from the oldest and purest stock – the Norse mythos.

Bring me closer to good things so that my life may be made better … or in the words of the old Anglo Saxon poets:

“A home is so very dear to a man

That if he can enjoy life in it,

Then what is right and accordable

Shall allow him eternal prosperity.”

-From the Anglo-Saxon Rune Poem

… Bring me my comics.