It’s a Convergence  madhouse, I tell you! There are way too many titles for me to go through by myself, so I cherry-picked the titles that interested me. However, I have to say: this event is going to put a severe dent in my comic budget for this month!

Wow … totally different pace from last week’s issue. There was also a difference in Telos’s attitude – more of a power-hungry despot and less of the servitor-automaton aspect. Also, as the cover indicates, there is a meeting between Thomas and Bruce that was clearly a major ambition on this series. Did I like it? Hell, yeah … the most prevalent emotion in reading this book was desperation borne out of survival. Also, there was sacrifice and familial bonding.

But the pace really caught my attention. It was fast – damn fast, but the problem I had was that it moved too fast so that there wasn’t enough time to get a true sense of these emotions. I enjoyed it, don’t get me wrong, but I think I would have liked more pages for the rapid change of scenery to properly sink in. Hopefully this is where the expansion into all the satellite titles will pay off and these emotions can be properly explored in them.

I really wanted this to work. In my mind, this was one of the best DC titles of the 90’s. Too bad it ended in 1992. But it came back in a variety of incarnations and as one of the New 52 titles. It’s a classic format and I was really pleased to see that in Convergence, they went with the Convergence variant of the 1990’s Task Force X.

I wasn’t too crazy about Tom Mandrake’s art but Frank Tieri’s scripting was engaging. I really intrigued by the match off between this world’s Metropolis and the Kingdom Come version. Definitely a cool premise. 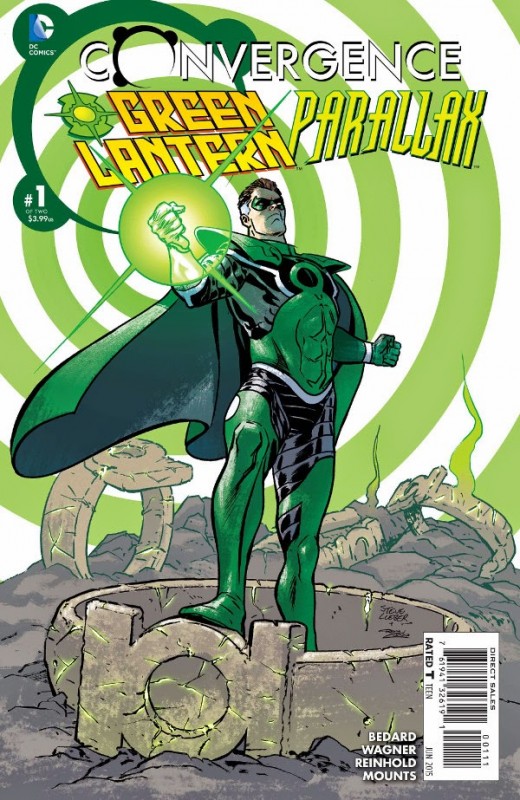 A little bland, to be frank. Parallax was defeated in the regular DC universe canon, so I hardly see the Hal Jordan/Parallax threat to be entertaining. He had his time. Also, this is a bit of a grey spot in the DC continuum for me: if Parallax was defeated and Kyle Rayner was the last lantern, then this just isn’t a different version of an Earth, it must be one snatched out of time. Remember that eventually, Hal Jordan (minus the grey hair), John Stewart and Kyle Rayner all coexisted together. So this book seems a little awkward with regards to continuity placement. Maybe someone with a better sense of Green Lantern history can fill that gap for me.

But I just found this to be a little boring. Green Lantern and Parallax wind up facing down the forces of Electropolis – remember that one? With Lady Quark and Lord Volt? It’s a bit of an obscure one to be sure, but Infinite Crisis fans will remember her. 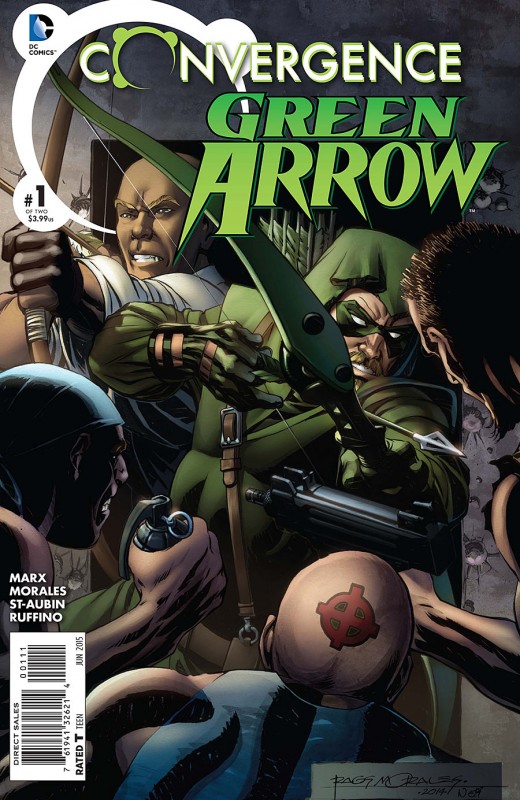 Not bad … definitely an insightful look into the Oliver Queen’s character – well, the one I remember from my Halcyon days of comic reading in the 70’s and 80’s – and the theme of reunifying a father and son is a workable one. But I have to say, it felt a little forced. However, the superb penciling of Rags Morales is always a joy to behold, so from that point of view, this wasn’t all that bad. 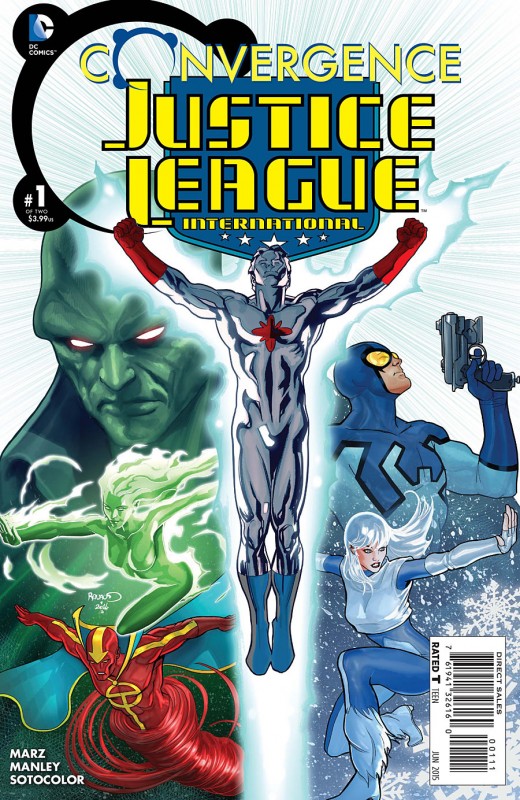 I still love my original JLI stories from the late 80’s. Of course, Ty Templeton was an artist from those days I’d like to think about just now. Just recently, I learned that Templeton recently suffered a heart attack. We at Popmythology.com wish him a speedy recovery and hope that he gets back to the drawing board real soon.

I miss the Blue Beetle so much that it was really great for writer Ron Marz to be able to write about this really fun character. As there are no powers under the domes, Blue Beetle is a character who can really shine in this de-powered world and it was completely appropriate to see him call the shots in this team.

Still, this wasn’t the JLI I remember from original creator Keith Giffen, so it left me with a bit of unfulfilled nostalgia. I think part of the fun in all of these Convergence side-titles is that we get to experience those really fun worlds from the DC multiversity, but the downside is that they are re-interpretations by contemporary creators, not the original ones. So it really isn’t the same, sad to say.

Convergence: Shadow of the Bat #1 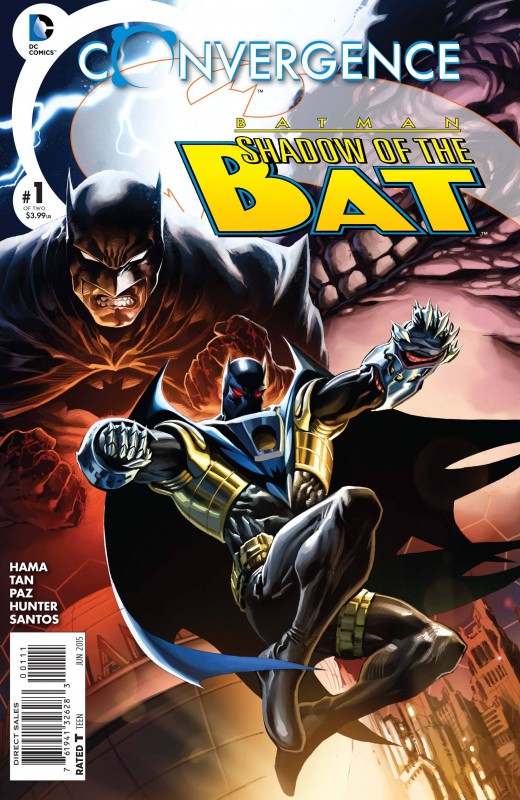 I was a tad confused by the changing narrative about two-thirds into this book. Azrael describes what he’s doing in a third-person sense and then winds up talking to Batman. It’s a little convoluted and I have to confess I was not the greatest fan of the Azrael storyline, so this was a little hard for me to appreciate. Later on, the appearance of two un-identified time-travelers also added to the confusion. Sad to say, I didn’t enjoy this one too much so I think it’s safe to say that it can be safely avoided.

A pretty weak showing from Marvel this week. 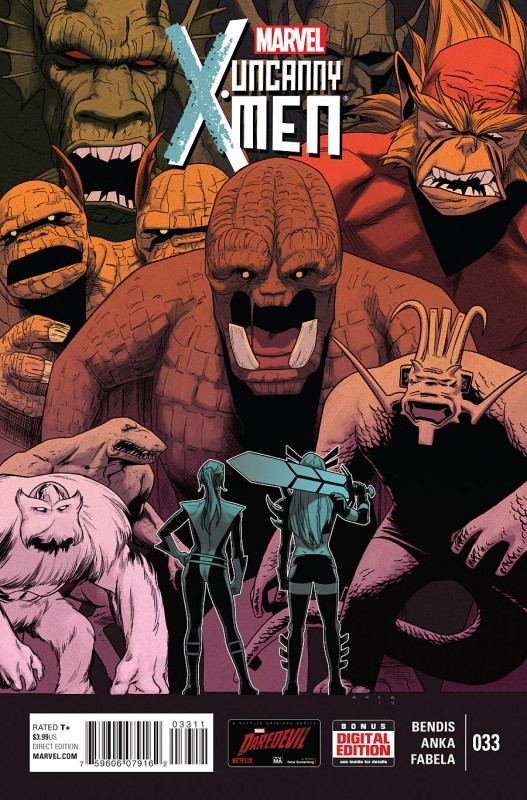 Well, simply put: hated the art, loved the story. In this issue, there’s a sense of wanting to re-connect between Illyana (who I think has got to be the most neglected of all the X-Men characters.) and Kitty pryde (my all-time favourite comic-love). Bendis does a really good job of allowing these two best friends to re-discover their friendship by searching for a new mutant to bring to the school.

However, I think he could have done a more in-depth job. It’s like there’s a recognition of what was good about the X-Men was in the past (their sense of loyalty to each other, them against the world and how unique they were) but that those themes shouldn’t be investigated again for fear of simply copying the work of the best of the X-Men creators of those days.

I want Kitty and Illyana to be friends again – why is that so hard to imagine? If the X-Men were to return to those core values of the 80’s, would it be so much of a bad thing? Still, all in all, a little is better than nothing and what little hint of the glory X-Men days I got from this story, I was grateful.

I remember playing Dungeons & Dragons wayyyy back in 1982. Then, TSR had the audacity to create a science fiction RPG called “Gamma World” that was science-fiction based and set in a futuristic post-apocalyptic world. The kicker was that the rule system was completely compatible with D&D. So along with swords, sorcery and strange creatures of mystic origins, now you could go up against robots, mutants and this amazing thing called science. Your plus four Holy Avenger was substituted for a Gatling radium laser, but you get the general idea.

I feel like saying it was predictable, but the truth of the matter is that I don’t care. This is the type of story I love. The mix of science and sorcery is never a bad thing and I like discovering new things about this world and about Reyn the Warden – and I’m dying to know more. So, the May issue of this comic can’t come too soon. 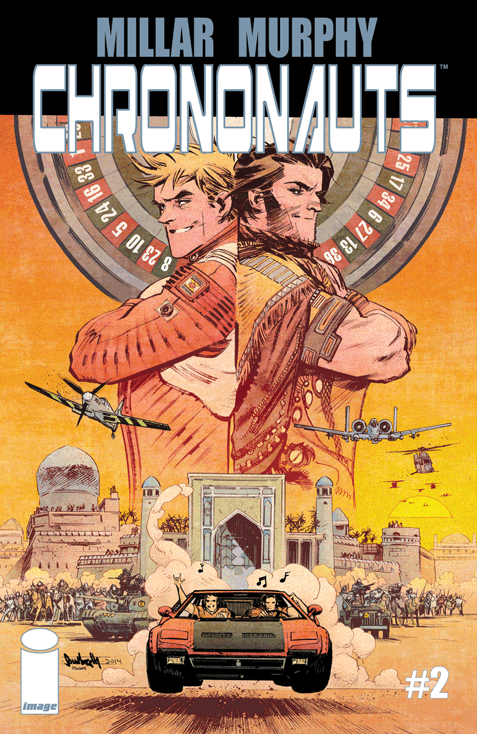 Heh heh … take two scientists who start to ignore the higher morality of their work and listen to their baser instincts and now you have an idea of what this book is about.

In all the time travel stories I’ve ever read, this one takes the cake. Think about it: if you had unlimited ability to move anywhere in time to do anything you want – wouldn’t you? Of course you would. Man is a brutal, base creature and these two characters are sterling characters of philosopher Thomas Hobbe’s assessment of humanity.

And you know what? It’s just plain fun seeing what these two unprincipled scientists get up to: dances with Norma Jean Baker, fighting off King Edward’s army and defending Scotland with Huey gunships and AK-47’s! Or how about hunting tyrannosaurus rex with an F-14? Mark Millar has opened up the totality of history for his loyal readers to play with like some giant chronal toybox. All I can say to this is: cool.

My pick of the week has got to go to: Chrononauts!

As much as I loved Issue #2 of Convergence for the craftsmanship, Mark Millar’s Chrononauts (penciled by Sean Gordon Murphy) has got to be a rip-roaring, rollicking good time! That’s what comics can do: the freedom to imagine two unprincipled rogue scientists going off the reservation like this is just a unique perspective on the revered subject of time travel.

The integrity and safety of the timeline must be preserved; the Butterfly Effect; cause and effect or paradox: these are all things that have gotten in the way of messing with history for your own desires. Come on … if you could imagine the ability to do it then certainly you would want to have some fun! That’s the whole idea behind this comic and that is a refreshing take on a time travel story. After all, if you’re going to trash eternity, then where else are you going to do it but in a comic book?