It’s history week this week. Most of the titles featured in this week’s list are Convergence, but all seem to be based in that 1980’s golden age of comic publishing success. The others also have a historical element to them, though not 80’s oriented; they still have something that marks them as historical in some way. 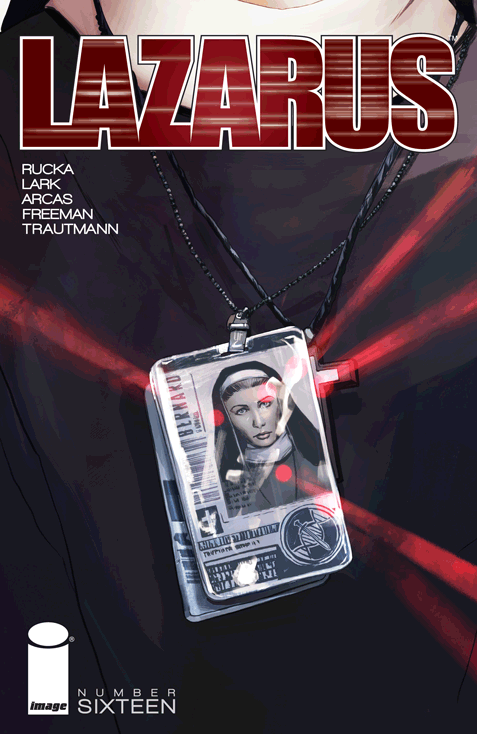 Just when you think you have sense of the rhythm of this comic, Lark and Rucka completely pull the rug from under your feet and throw you into another part of this strange new world they’ve created. In this issue, we see a non-combatant used as an intelligence asset for gathering intel as war has been declared between House Hock and Carlyle.

It’s nail-biting, tension-ridden and agonizingly forces you to digest the internal monologue as Sister Bernard contemplates her position as a medical practitioner and woman of faith devoted to the thousands of charges of “waste” personnel who eke out a living in the abandoned land holdings of these great families.

A nun as a covert operative, who must get a Hock re-engineered version of the influenza virus back to House Carlyle to develop a vaccine. It’s an astounding story concept that is framed by Sister Bernard’s questioning of her faith. It uses the biblical idea of rendering unto Caesar what is Caesar’s as a form of spiritual compromise; caught between servicing the poor and providing espionage duties for Carlyle is an extremely vivid story idea.

I was riveted by this issue. To see the internal turmoil of this woman of God set against the harsh reality of this new Earth is why I swear this comic is the absolute finest one on the market right now. If you’re not reading this book, you have no appreciation for comics. 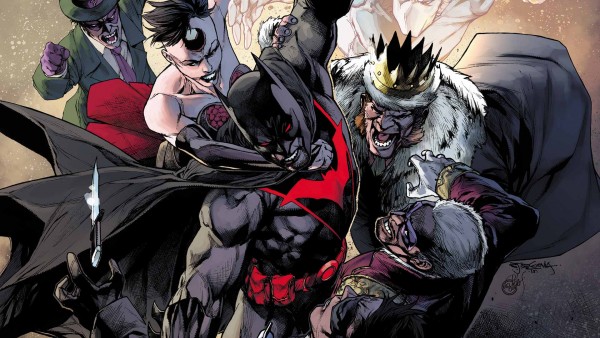 Wow … more pulse-pounding drama. It must be hard to load a comic with such intensity every week. King has done a really good job of filling these pages with dynamic plot and characterization. Thomas Wayne is definitely an extremely grim Batman and has become a favourite of mine in a very short period of time. I loved him in Flashpoint and very happy to see his reprisal in Convergence.

However, I’m seeing very little connection – other than the obvious locale choice – with the supplementary titles in this series. I know it’s a near impossible thing to coordinate multiple writers in such a short period of time, but still I want to see more than just two-issue mini-series; I want a truly unified event of detailed proportions and it has to tie up all the loose ends of the DC universe in one fell swoop.

Am I attaching too much importance to this event? Yeah … maybe, but is it too much to expect greatness with the assemblage of talent DC has managed to recruit for it?

Marv Wolfman said this was like taking a trip back to 1984. Well, I can’t see anything wrong with that. In fact, I’m declaring this issue of the Convergence subtitles to be the best one I’ve read so far. I can’t accept that the Titans wound up in Gotham and not New York, as they were in 1984, but I definitely say that no-one can put together such a clean and concise storyline as Marv Wolfman. Nicola Scott, the artist on this one, is a wonderful partner for Wolfman – and dare I say even a worthy replacement for George Perez?

Blasphemy? Sorry, Titans fans, but this was a dynamically awesome issue that contemporary Titans readers will enjoy and generational ones like me will get a huge nostalgic charge out of.

Convergence – Superboy and the  Legion of Super Heroes #1 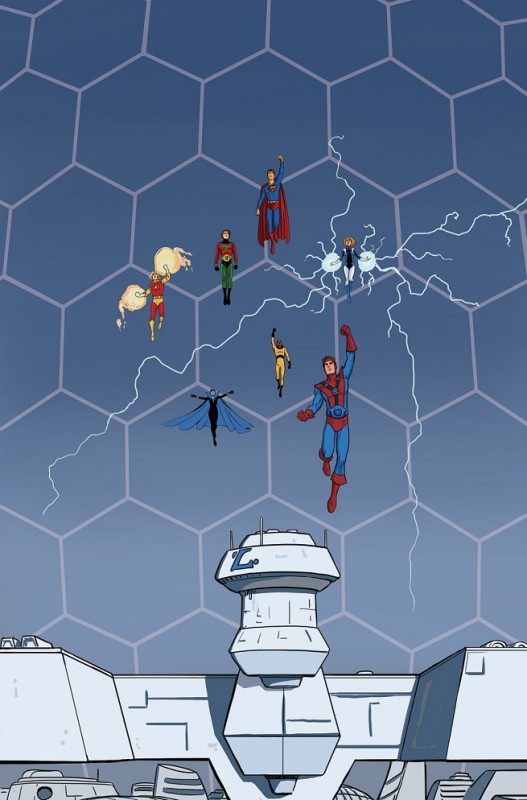 More nostalgia. Didn’t mind the premise, but I have to say that I found Gus Storms’ penciling wasn’t all that great. The eyes on a lot of the characters seemed disproportionately huge and varied in size in different panels.

Stuart Moore did a pretty good job in presenting the Legion as they were in the late 1980’s and I found his interpretation of characters like Brainiac 5 pretty spot on. This was a pretty long intro issue though so the rest of the story is going to have to be resolved fairly quickly next issue, but given that the Legion is facing the Atomic Knights, I don’t think they’ll have too much difficulty in wrapping it up. 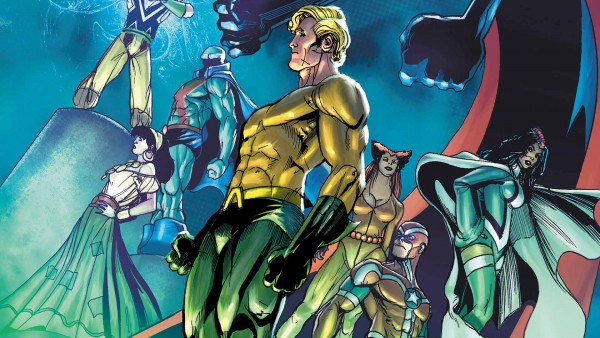 Again with the 80’s characters! Don’t get me wrong – I’m not complaining. This is like a mega-smorgasbord of 80’s goodness. This variation of the League is the Detroit one with Aquaman in charge, Elongated Man, Vibe, Gypsy, Steel and when Zatanna wore a red cockroach in her hair. I’m a kid again desperate for a Snickers bar to go along with all this reminiscing down memory lane.

To see Ralph and Sue Dibney in the opening panel though … well, that’s just a romantic treat for all comic readers. To see one of the greatest – and most tragic – love stories restored for a brief time is something sweet to treasure. Yeah, I’m a honey-dripper.

Convergence – Batman and the Outsiders #1 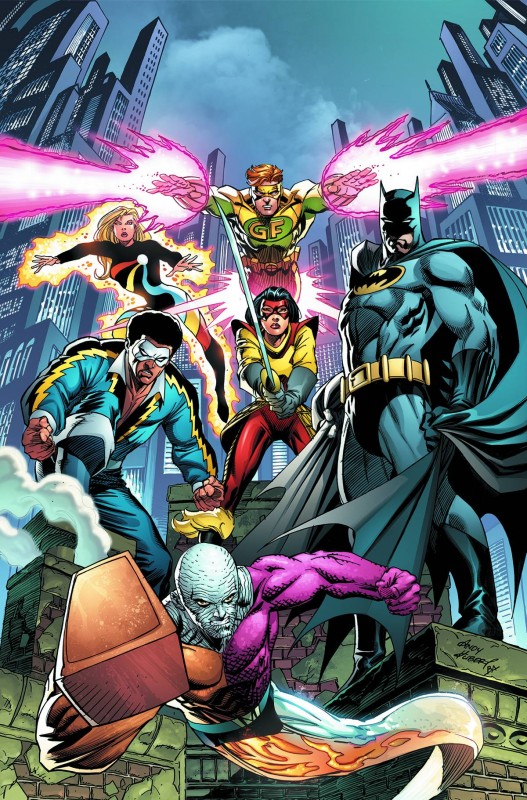 No way. I was really excited to see this title in the line-up. I was only reading two DC team titles in the 80’s; one was the Teen Titans and the other was Jim Aparo’s Batman and the Outsiders. This was an incredibly cool team book with a bunch of misfits who needed Batman’s tutelage. To me, this was when Batman became relevant and attainable.

Another long lead-in, but terminated at the right point when we see how all the characters are adjusting to life under the dome. I enjoy seeing Batman in a team setting – I know it doesn’t seem right, seeing as he is the terror of the night and all that, but there’s something reassuring about seeing Batma take charge. He’s a perfect leader and the Outsiders were his army. This book worked well.

I was looking forward to seeing more of this book. A change from the Convergence series as we move into DC’s vertigo line-up.

Good … rich and plenty of story set-up for the future. This is a filler issue, but it does whet your appetite for finding out more about our mysterious giant immigrant as well as the back-story to the Saint. I love Bermejo’s art styling though – dark, gritty and full of detail. I can’t wait for this story to play out though and to read it in complete and in hardcover would be amazing.

I swear I can hear John Williams’ soundtrack when I read these pages.

Jason Aaron has got the vibe of the Star Warriors down pat. John Cassaday can render their likenesses near perfectly and I have to say, seeing Jabba the Hutt try to get chummy with Darth Vader is nothing short of a treat. Just pure awesomeness.

As much as I was wary about Disney owning both Marvel and Star Wars, this comic is setting my fears to rest. This has become a work of such high quality that it’s the type of comic the readers of this generation need to get back into the medium again.

Guardians of the Galaxy # 26 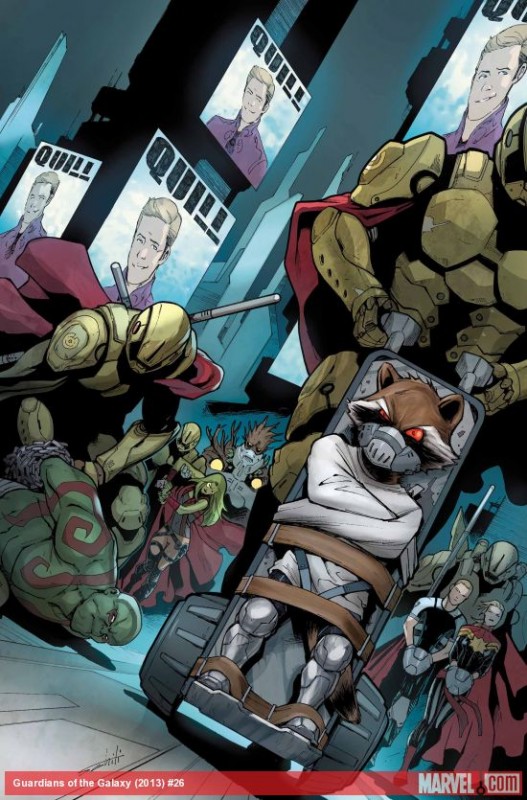 Even though this has been a bit of a faltering book in the past, this new angle on Peter Quill becoming president of Spartax (I can predict the “THIS IS SPARTAX!” jokes already – just stating that for the record here) with the Guardians as his council might be okay. Maybe I was just relieved to see the death of the Black Vortex storyline – what a dried up fishbone of a yarn that was.

However, I am dead set against his marriage to Kitty Pryde. Nobody touches my Kitty.

This had humour in it, and while exclusively relying on humour may not be the most successful strategy to follow for extending a faltering comic book, it seems to work for the movie. So, maybe this might work, but I have to confess that Schiti’s artwork really wasn’t my cup of tea; it bordered on the comical as opposed to comic art and I really didn’t take it seriously. 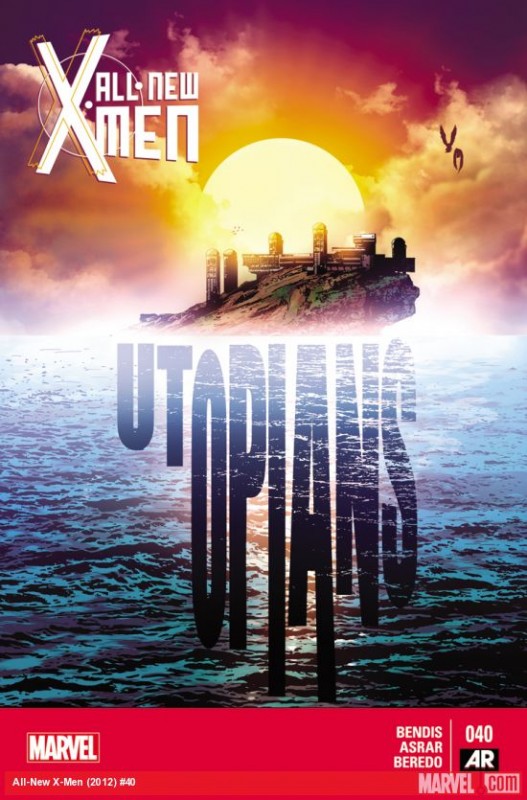 Choose whatever word you want, that’s all this comes down to. I mean, is it really of any story relevance that Bobby is gay? Does it make any difference to the integrity or enjoyment of the X-Men?

Look, if you want to add a gay character, then create one. Don’t retcon an existing character who has established history in the Marvel Universe for the sheer shock value. It’s lazy story-telling and it doesn’t even make sense. Sure this is the younger Bobby Drake, but that still doesn’t account for the fact that the older one is straight. If he’s really gay, then so should the older one be. This idea is even brought up in the story with no resolution. It’s like Bendis had a total brain fart on this one.

The appearance of these junior original X-Men from the past have proven to be nothing but a pain in the derriere ever since they arrived.  Useless, just plain useless characters that need to be removed.

Fred Van Lente must have fun writing this book. I mean, anything that deals with time travel is always fun for me to read but I want to know how someone can keep track of all the idiosyncrasies and paradoxes involved with travelling through the past. Then there’s the future! Don’t get me started on trying to tell a story about the future. Just look at all those 1960’s Legion of Super Heroes stories!

This comic is weird – but it’s meant to be weird. It’s got humour but it also has a strange sense of storytelling that aims for balancing out all of the crazy stuff that Neela and Ivar seem to get into as he tries to save her from herself. The weird thing though is that I don’t know if she needs to be saved from herself so every issue forces the reader to recheck what he thinks is going on in this book. It’s really compelling and I feel really compelled to pick this book up every month and just figure out what is going on this month.

After due consideration, the honour of being the choice reading material for this week’s pulls has got to go to:

I have to say that Lazarus already has the distinction of being the best comic book on the market right now, so it can afford to pass this week up. But the return of Marv Wolfman to a title that he piloted and perfected and the chance to read the Titans as they were in the eighties? Just pure magic. This is a truly great nostalgic return to DC’s golden age. The Titans may have been created in the late sixties but they found perfection in the eighties when comics were at their highest selling point.

Part of the reason for the success of comics in the eighties was because of creators like Wolfman. He has to be one of the best storytellers out there and the level of quality and flawlessness in presenting and sustaining characters in a story makes him one of my all-time favourite writers.

This week’s reading selections have shown us that history rocks, especially in comics.