This evening I’m on my way back from a comic store, listening to “Tom Sawyer” by Rush blasting out the car window.

Okay, I’m driving a car on the Don Valley Parkway, carrying more personal body weight than my 14 year old previous self and I’m getting home as fast as I can to say good-night to my kids, so I’m definitely not that person anymore. But for a brief moment of nostalgia I’m just a kid with a bunch of comics to read tonight.

I’m leaving the farewell and Industry Night Party event of the Comic Book Lounge and Gallery, owned and operated by Super Fan Guy, Kevin Boyd. The store will be closing its doors until another locale can be found but for now, Kevin is still continuing his comic subscriber operations by either running pick up or delivery services. If you live in or around Toronto, then check out www.comicbooklounge.com for more information. Kev’s a great guy and a true comic fan who knows how to treat customers.

Such an eclectic mix of new and nostalgic titles to look at this week. 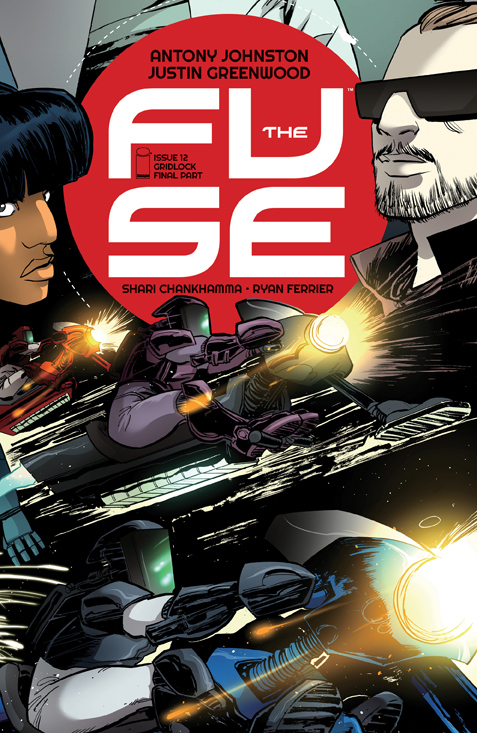 Oh Wow … the finale to the amazing “Gridlock” story leaves its reader with not only a sense of closure but an appreciation of the intricate way Antony Johnson can weave a crime noir thriller out in space. The realism of the near-future circumstances also goes far in leaving the reader with a sense that a place like the Fuse could possibly exist. The politics, the constant threat of terrorist attacks and the starkness of living conditions on some levels of the Fuse make this a completely believable story. It has to be read.

That this issue ended on the prospect of discovering more to “wunder-cop”, Ralph Dietrich’s identity has really whetted my appetite for more of this amazing comic. Just another testament to the good work that Image is doing these days and another level of accolades for Johnston and … 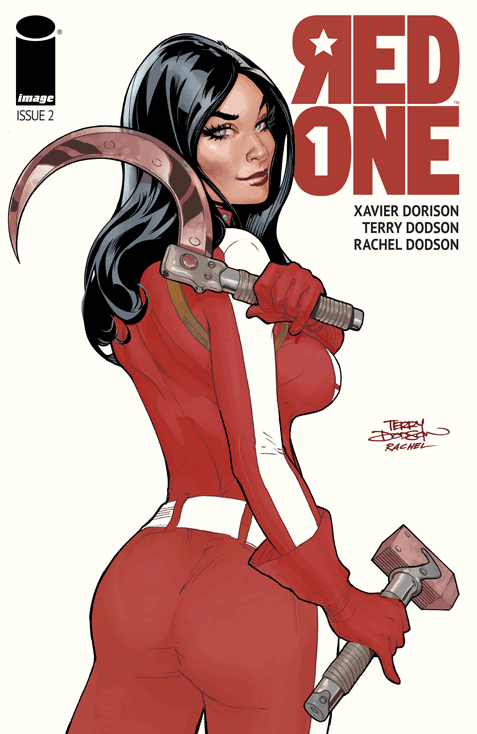 I love the political irony in this comic. It’s the 1970’s. It takes a gorgeous, sex-bomb like Krasnio Odino(Red One in Russian) whose sexual appetites are fairly voracious to undertake a mission from the First Secretary of the Soviet Union (if anyone is of a historical mind, it might be remembered that Leonid Breshnev was hardly a saint) to become an American super hero and point out the depravity and decadence of American culture in the sex-filled seventies.

Of course, nobody can draw a female super heroine like Terry Dodson. Xavier Dorison has some pretty snazzy dialogue in this issue as well. In fact, this entire comic is so novel and unique that it’s also a heck of a lot of fun to read. It’s pure entertainment and really captures the essence of the 70’s culture – from a Soviet Russian’s perspective. However, Red One is so charming, you are instantly mesmerized by her charm. You want to read this, strictly for the feel-good spirit it emanates. 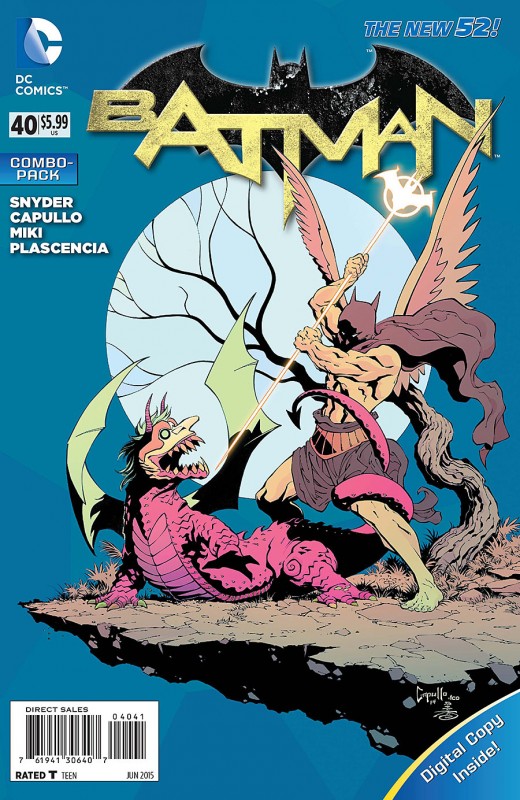 What is up with this issue? Okay … suffice it to say that something dramatic happens in this book – but I don’t want to be the one who unleashes the spoiler. But what I can say is: outstanding storytelling from Scott Snyder. This is the man who brought Batman into my life. If this man was a Jehovah’s Witness or a Mormon Missionary, I’d be inviting him in and listening to the Word.

I’m not going to say any more about it. Read it. 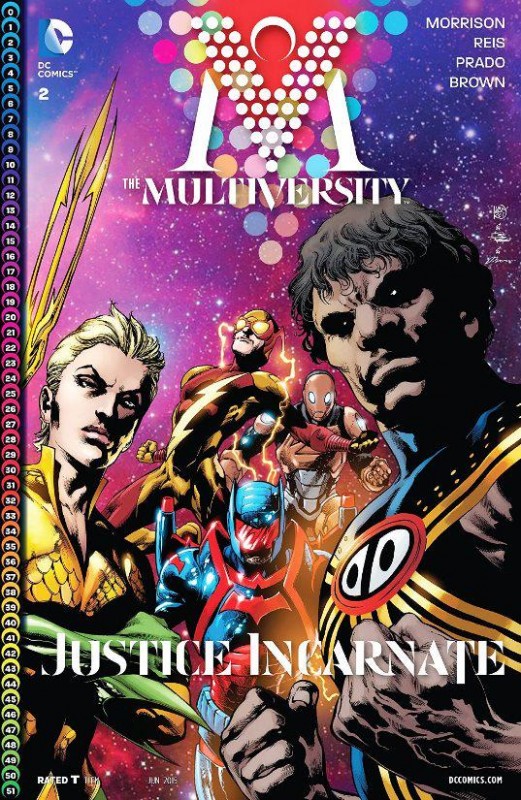 Okay … if you ever needed an excuse to showcase the full dimensional array of the DC universe, this is it. Seriously, way too much to effectively focus on. If Grant Morrison’s aim was to overwhelm his readers with the totality of universes DC has at its disposal, then he was successful. However, there was way too much for me to keep track of and I think, the message of this book was completely lost.

What was the message, by the way? Anyone figure that out?  Was it that there is strength in unity, regardless of the level of the threat? Okay. Or could it be good and evil exist in standards that are recognizable wherever you go? Whatever it was, it was diluted by the apparent need to use all of the available properties in order to maintain the intellectual claim on them. Overkill – just overkill. 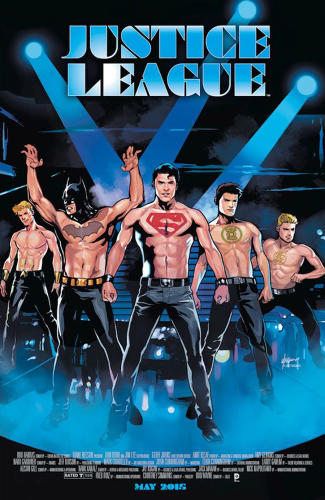 Well, if there was ever a cover to enlist the readership of the young, female contingent of comic-lovers out there, then this was the one to do it. Quite the homage to Magic Mike.

However, there is nothing remotely related to the cover in the story. While the disconnect is a little odd, the story itself was quite intriguing. It’s the first DC comic that tried to contextualize the all the various crises the DC Multiverse (yeah, I’m gonna start using that in regular comic parlance now) has experienced in relation to the recent Convergence event. However, if a little Darkseid is thrown into the mix, now you have a comic-storm of greater-than-epic proportions.

What has been a hallmark of modern comics from the 1960’s is their ability to somehow allow us to conceptualize the nature of a god … and then trump that nature somehow. DC has the New Gods (created by Jack Kirby) who are godlike, yet pale before their nemesis, Darkseid. He is the power that makes these gods struggle, which provides conflict to their stories.

In the 21st century, comics are going beyond the physical conception of ultimate power and are now messing around with, well, infinity. Only comics can do this and Geoff Johns is biting a huge chunk of his readers’ collective ability to suspend their disbelief and expecting them to swallow it.

However, I have to say, I really enjoyed the resurgence of the New Gods and how they fit into this New 52, and that the Justice League will be inevitably facing Darkseid – oh, and a surprise new enemy who seems to trump Darkseid himself. Definitely an engaging comic. 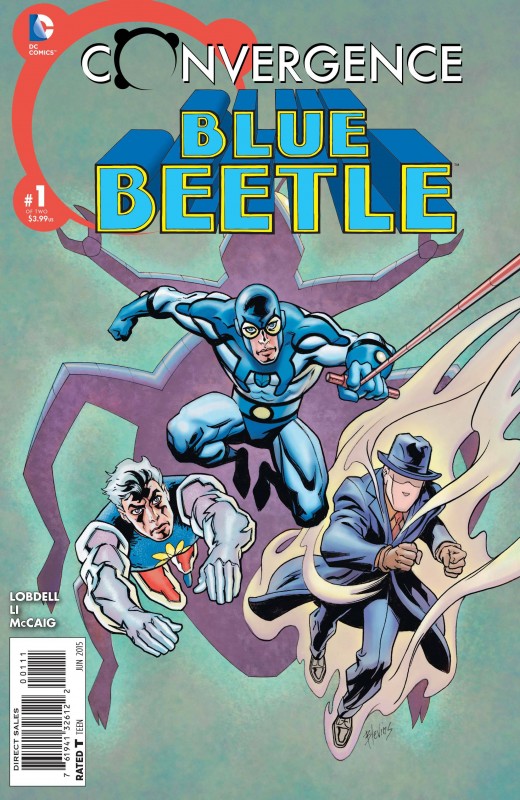 I loved the Blue Beetle; my favourite character to come out of the Charlton mob of characters that DC acquired in the mid-80’s. Convergence is an excellent opportunity to bring these characters back to life for fossil comic readers like me. It was cool to see the original Captain Atom in his original 60’s gear as well as Vic Sage as the Question.

While the story was enjoyable, I have to say that I’m a little confused at how even the myriad of universes can justify two exact same Blue Beetles – one from JLI as well as the Charlton variant, seeing as they are exactly the same guy. Maybe this one should have been left out of the mix. 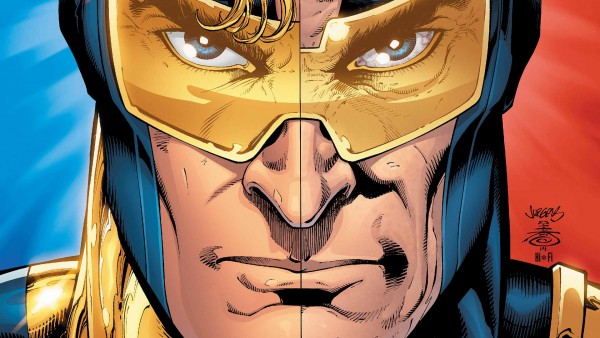 Okay, so this was who I was looking for two weeks ago when I was reading Convergence JLI.

However, this has the same question perplexing me as the above entry. This is a great story but the nagging itch is can DC maintain the continuity in this grand enterprise? I loved seeing the Blue Beetle and I love Booster Gold … but they need to be together, and not at the expense of new story continuum DC has on the go here. 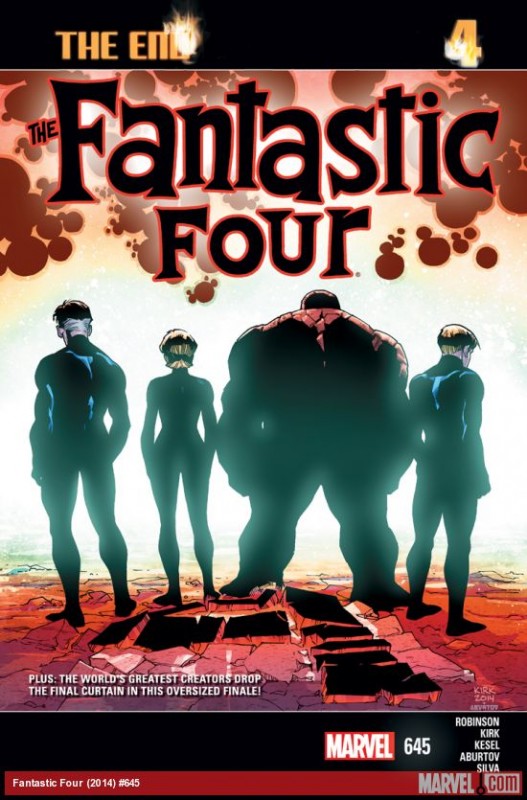 It’s done. Stick a fork in it.

The event I was at this evening saw the attendance of talented artist, Leonard Kirk. He’s a Kirk – I’m allowed to brag about him.

This is a really decent and thoughtful guy, who is a real pleasure to meet and chat with at comic conventions and we, in Toronto, are really lucky to have this guy nearby. I have two commissions from Leonard in my home office and they are spectacular. Anything this guy does is worthy of writing about.

So that brings us to Fantastic Four #645. Marvel has fully baked this cake and Kirk is the guy putting the icing on it. It’s over, sad to say.

It’s a double-sized issue, and there are a few stories after James Robinson’s main storyline. There are a few dramatic events, and I’ll spare you the spoilers, but suffice it to say that the FF go out in a “blaze of glory.

It’s the extra short stories in this comic that are really striking as well. Louise Simonson pinch-hits a touching tale that highlights the relationship between a mother and her son. Lastly there’s a true tale of the Thing by Tom DeFalco that you can really sit back and smile at his “revoltin’ developments”.

It’s the end of an era and it’s sad to see this Marvel mainstay go. 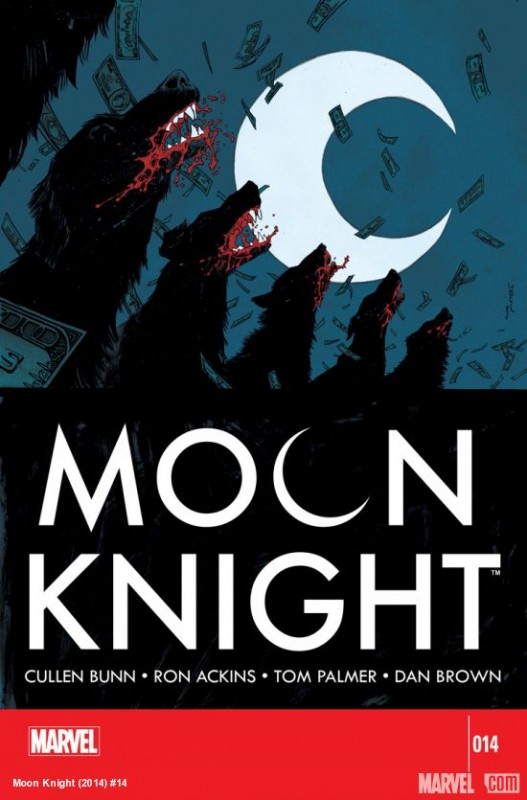 Just awesome. In this issue, Khonshu’s protection extends to all travelers of the night – including those of the four-footed variety. Mark Spector investigates and discovers the crime perpetuated against Moon Knight’s flock. This is a one shot story that is snappy and to the point. I love independent tales like this because they allow you to see the character in its finest. Cullen Bunn has the tempo of this character in his dialogue; you can almost hear the sepulchral tones that Spector adopts when in his traveler persona. 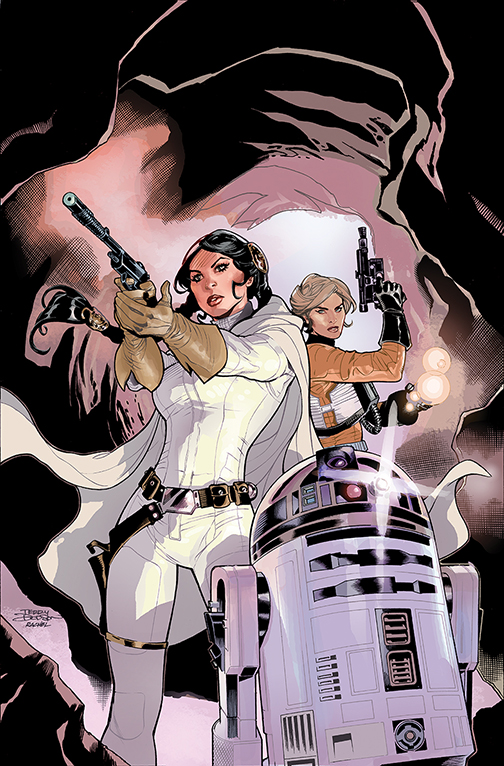 Doubly blessed by more Dodson goodness, but aside from the amazing artwork, Mark Waid has created a pulse-pounding adventure that really comes from the heart of anything George Lucas would have wanted for any of his creations. Marvel’s efforts to continue the Star Wars saga in comic form has been nothing short of overwhelmingly spectacular. I was concerned that when Dark Horse lost the rights to the franchise that nothing would come close to their level of proficiency but Marvel has admittedly surprised me. I’m glad to see that they didn’t hold back their A-talent. 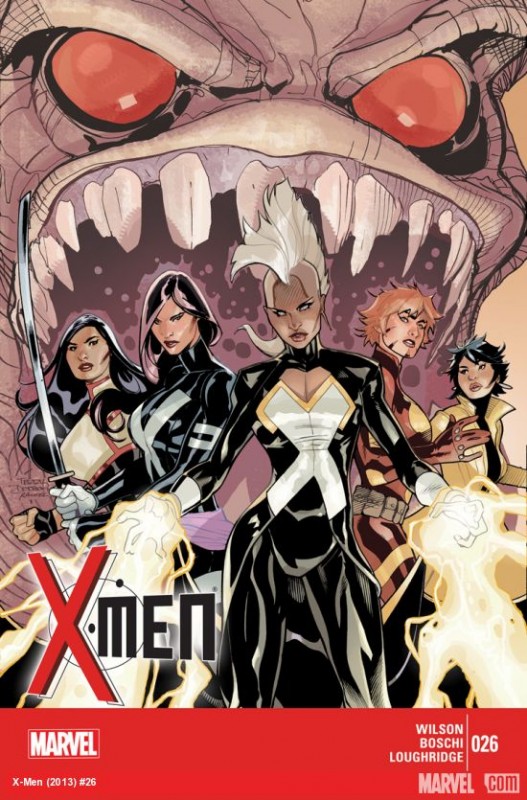 Wrapping up the arc on “The Burning World”, aka Krakoa version II, I wasn’t really overwhelmed by this storyline. What was interesting was the brief mention of the possible re-appearance of a certain Canadian mutant known to X-Men fans, young and old. Still, a fairly generic story without anything dramatic to report, it makes me wonder why this title continues when there are so many other X-titles out there.

The choice title for this week’s list has gotta go to Fantastic Four 645.

Look, Leonard Kirk is a great artist and I hate to see his work finish and the end of this iconic super-team. I was very happy to learn that Kirk has some great projects lined up. I’m not at liberty talk about them in any detail, but let me just say, we’ll definitely be following his work in the new Marvel title he’s lined up for.

If there was anyone who could give this title the proper send-off it deserved, it’s Kirk. His skill with action sequences and emotional expression really make this issue a poignant farewell that sees the FF as a still vibrant and dynamic super-group. While the comic is over, the FF aren’t. I’m sure we’ll see them pop up throughout the Marvel continuum but for now, the title is done. Great story by one of my favourite writers, James Robinson and just the way I’d like to see the FF finish off.  Make sure you pick it up.

If you’ll excuse me now, I’m going to try and be 14 again … except with beer.