There has to be a purpose to make a change.

Let’s face it: change is inevitable, but it’s not a force that is invulnerable to persuasion. Change can be re-directed, influenced or in some way affected by those it involves but it can’t be stopped. We are rational, thinking, and creative people. It’s how we deal with change that shapes our experience.

That applies to comics and their universes.

Marvel’s response to DC’s Convergence is a re-booting of the 1980’s mega-event The Marvel Super Heroes Secret Wars, titled simply Secret Wars. Both see drastic changes to the universes. (**Batman #40 Spoiler Ahead**) If you caught Batman #40 last week then Batman’s death is obviously an event that took a lot of readers by surprise (though it did seem somewhat derivative of Frank Miller’s The Dark Knight Returns). Of course, we all know that with the universe in flux, this probably will not be permanent. The typical way that comic publishers respond to change: a return to the status quo because what works, sells.

Hence the DC emphasis on re-using the multiple universes it is famous for. Remember Justice League #40 last week? Yep – finally a New 52 comic that explained the New 52. Took them a while, but essentially it was a return to the multiple paradigms of universes that made DC such a fun publisher in the Bronze Age of comics. The fact that there were a myriad of Earths that all had their own rules worked amazingly well. DC didn’t run into story problems until they started messing with them.

The New 52 replaced all of those, but the Multiversity titles and the Convergence event are bringing them back into focus in some sort of attempt to re-define them. You know, try to attach a purpose to this major change.

Now Secret Wars is attempting to do the same thing. Will it work? Let’s take a look at the titles I’ve chosen for this week. 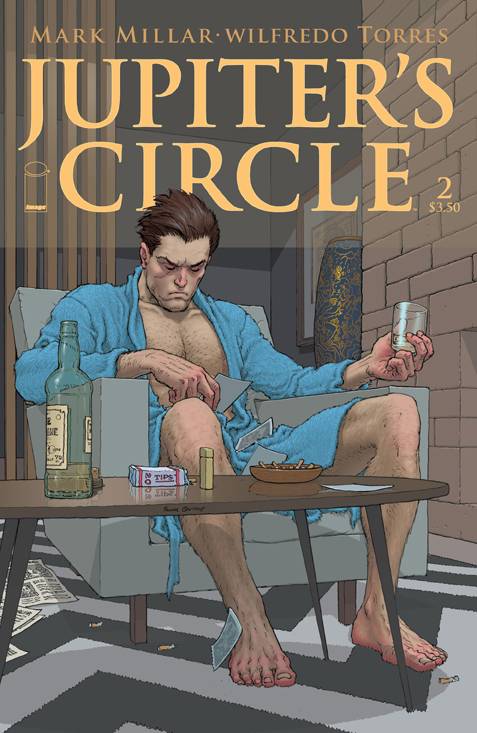 Looking good, Mark Millar. A very poignant and human drama about tolerance and an historical examination of the severity of American Cold War era in the 1950’s. Not only did American society have the communists to worry about but also the various threats to its moral standards. I think I enjoyed reading this precursor to Jupiter’s Legacy more than its descendant. I love “behind-the-scenes” stories, and this simply isn’t a tell-all of the comic’s super heroes and their lives, but it’s also a backstage look at American society in the 1950’s. With its connections to Hollywood, this story talks about mainstream American perspectives in media about sexuality, politics and role models. It’s a very cleverly written comic about how far Western society has come in the last sixty years and definitely worth picking up. 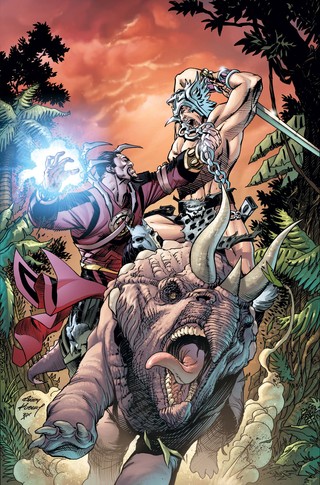 We can see some drastic changes in this issue of Convergence. First, definitely a major change in terms of who the adversary of this story has turned into and second, there seems to be a real shift in direction. Is this about a competition between universes or could the fact that now there is a new threat to unite against mean that the universes may all survive and return to a near status-quo pre New 52? There’s a lot of speculation wrapped up in this book and I have to confess that now I’m a bit confused as to where they’re going with it. I thought I knew three issues ago, but now I’m a little in the dark. So, that’s probably a good thing. I’m hopeful … I’m hopeful. 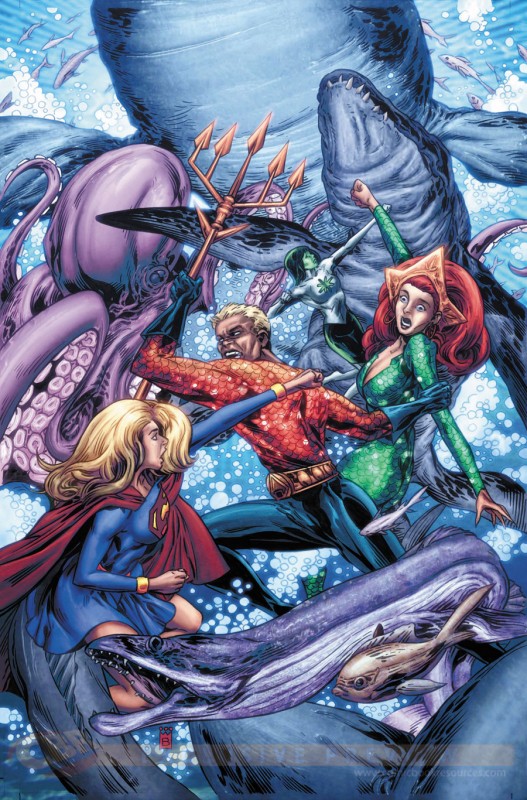 Vicente Cifuentes’ art doesn’t really sell me on this book. In some instances it seems vague and rough but in other occasions it’s extremely sharp and delineated. Frank Tieri doesn’t have to work too hard on the story: it’s a fairly simple fight issue, but there are some times when he manages to surprise us with some pretty nifty tricks. Of course, the ending is never in doubt. I was never a fan of the Flashpoint version of Aquaman.

Overall, not bad. Could have been better, but I think it was a better issue than the first one.

Pretty simple. I mean, I’m pleased to see the return of Ryan Choi – not from an anti-Ray Palmer perspective; I hate to see any super hero bite it. I am also pleased that Ray Palmer is no longer receiving street-meat handouts from local restauranteurs and that he isn’t having conversations with himself, but the opposition on this one was pretty c-level. Barracuda, from the Extremists?  Even I’m having a hard time trying to place this guy. If two Atoms couldn’t take this guy out, then neither one is the Atom that I remember. 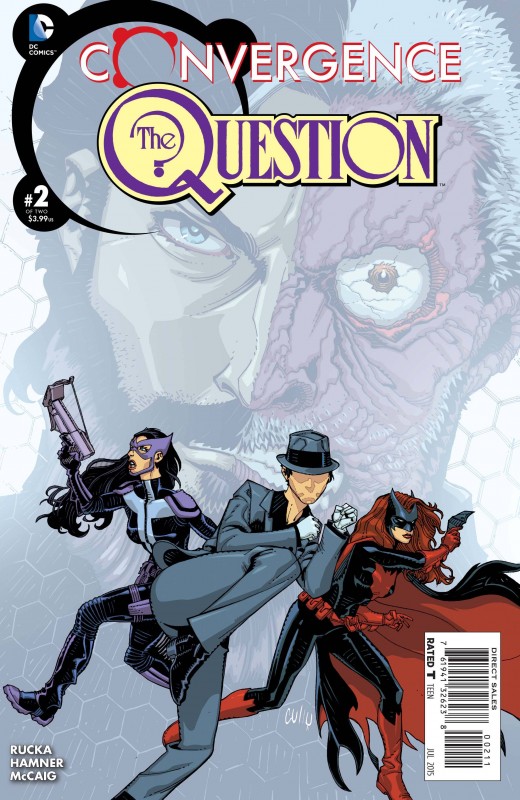 I was never a fan of Renee Montoya as the Question. I liked Vic Sage, I truly did. Perhaps out of loyalty to the old Charlton brand, but he seemed to have a confidence built into his character as well as an aura of mystery that Montoya was never able to develop, no matter who wrote her. To me, she will always be the pupil – the replacement, never the original.

However, I am a big fan of Greg Rucka and he manages to craft a very compelling story with what I have to consider a minimal assortment of tools. The Huntress – good character, but Batwoman has always been an annoying and redundant extra to the Batman family in my mind. What makes her interesting is her relationship to Renee Montoya, who, as I have already mentioned, a second string character at best.

But Rucka does a great job of weaving family and interpersonal relationships into a story of a hero’s task to redeem or save a villain from himself. What I did like about this story is that it was different from all the other “fight” stories of the Convergence titles and became a human drama about someone just trying to help another person in need. It was touching and meaningful. 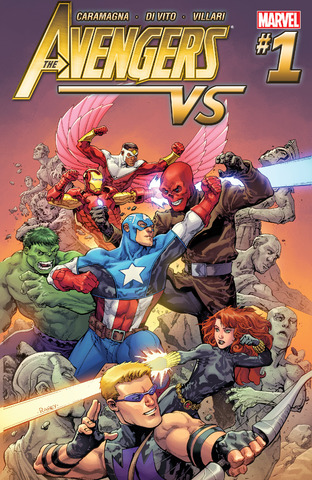 Whoosh … the weight of this book alone is fairly extensive, but that’s about all the significance worth writing. Four stories in one, this issue includes the artistry of four pencillers: Andrea Di Vito, Wellington Alves, Ron Lim, and Dario Brizuela.

The word I’m looking for is trite. These are just a series of vignettes without any real sense of extended plot or value. Basically, think on the animated cartoon level of entertainment and you have an idea of what these are about. After all, when Attuma says “drat” … you’ve lost me. 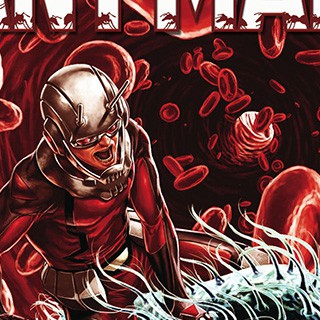 Too fast … the story happened too fast. I wanted to get a little more poignancy out of a father fighting for his daughter’s life. I’m a dad to two lovely little girls, and I can tell you, there isn’t anything or anyone that would stop me from going toe-to-toe to protect them. I wanted to get more of that out of this.

Not to say that it wasn’t there … I just wanted more of it.

But I love this book. It’s a real trip and I love to see an imperfect hero trying to change his life and redeem himself for all of the bad things he’s done in the past. This is a story of a hero trying to be his own hero for the general good gets to benefit from that. It’s an extremely entertaining book. 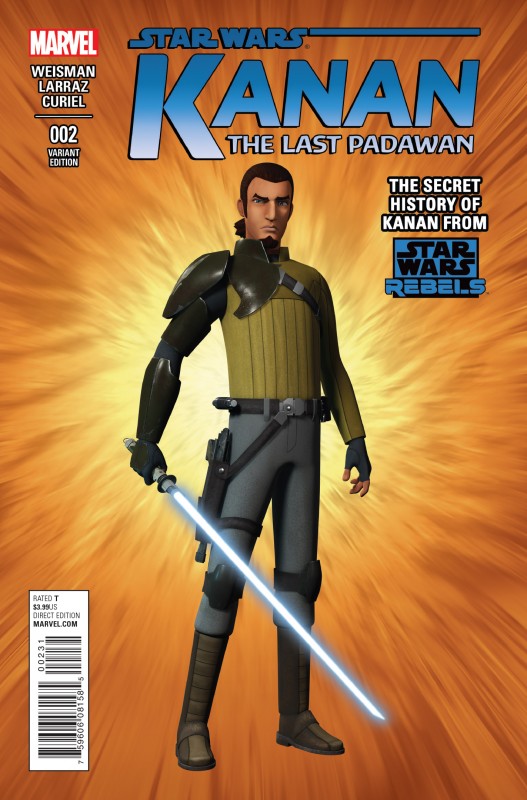 Wow… it does seem to be a bit of a while ago when Issue #1 came out. So I had a bit of difficulty recalling the last issue.

I am not a fan of Episodes #1, #2, #3 … as any self-respecting Star Wars fan would be. However, we have learned to accept them, somewhat like accepting the non-compliant and un-apologetic members of our families. They are flawed and imperfect, but with the Force as our ally, we shall move on and hope that Episode #7 will make up for them.

But this comic does that too. In all seriousness, the Emperor’s Order 66 was probably the one story event in that twisted trilogy of prequels that had any serious story value to the franchise. In this comic, the young padawan has to somehow survive the Jedi Purge and is told that he will have to lie, steal and cheat like the rest of the citizens in the Empire in order to survive. It’s an amazingly cool premise in that this is a Jedi who has to unlearn to be a Jedi, which is counterpoint to Luke Skywalker who desperately tried to become one in his adventure. Definitely a fun inclusion of Star Wars prequel canon that is worthwhile reading. 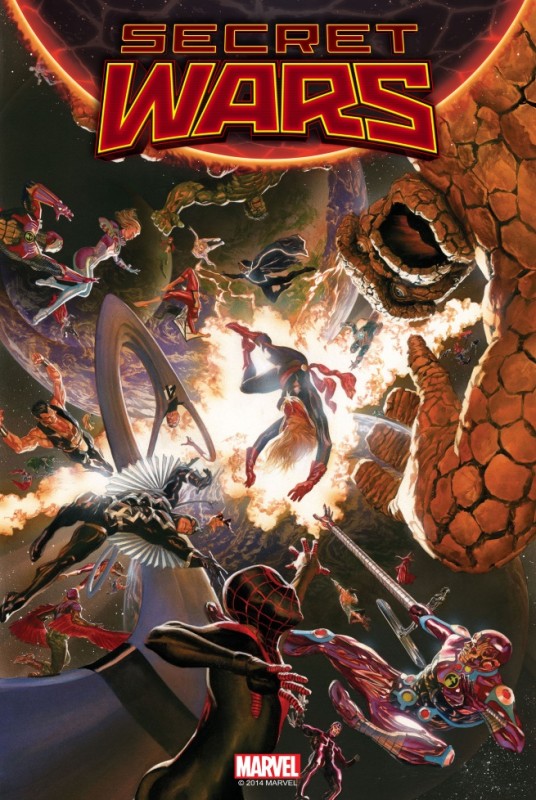 Now for the main event.

… Forget everything that you know.

It’s all gone, people. It’s all gone. Wiped out in a matter of pages, you cannot begin to believe the amount of catastrophic damage that has been done here.

Forget the prelude … I’m declaring it right here; this is the comic of the week. Why? Because of the sheer amount of unrecoverable and scope of destruction that has been featured in these pages. The 616 universe goes up against the Ultimates Universe and only one can remain, right? Wrong, and you need to read this book to see just what sort of hell has been unleashed.

I’m actually concerned. I have no idea what the hell to read any more after this. What about Ant Man? Why should I bother to pick up Moon Knight – which happens to be my favourite Marvel book right now? It’s like in one fell swoop, Marvel has reduced my choice of reading matter because after Secret Wars #1 it doesn’t seem to matter.

So I’m not picking this as my choice of the week because I loved it – actually, quite the contrary; it’s terribly frightening. It’s like the scene in Harry Potter when Harry gets told by Olivander that Vldemoret did great things … terrible – but great. Now you have an idea of this comic.

So this is the way Marvel handles change.

Yup … it’s inevitable, and we have to deal with it, but I have to confess that for all my bluster of accepting it, I still fear change.

That’s why I still have clothing older than my children.