It’s a short and simple list this week. The two big companies are fighting for market share with the continuation of their major events (Convergence and Secret Wars). Of course, one of life’s greatest and most under-rated principles is that simplicity is best. It makes this week’s selections pretty easy to appreciate and enjoy. Let’s get straight to it. 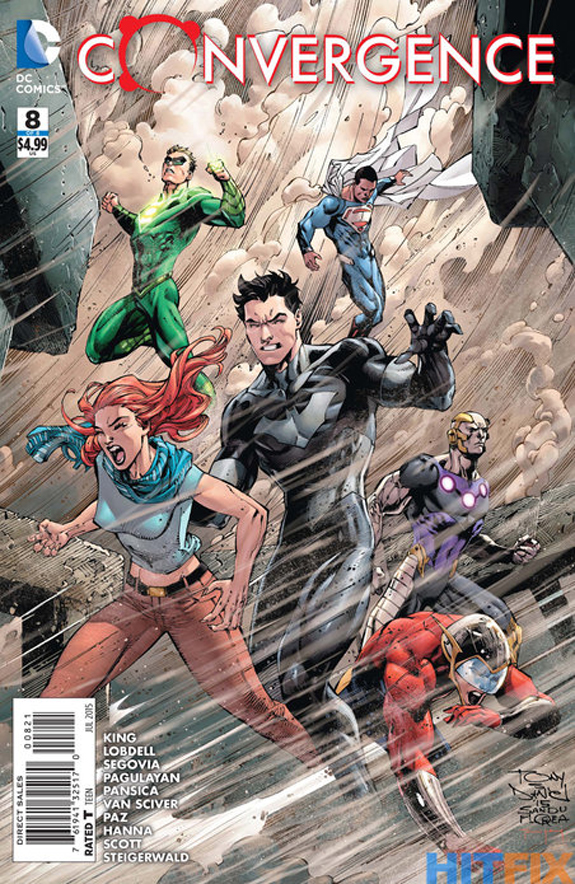 This is it – all wrapped up and the question we have to ask is if it managed to deliver on what it originally promised.

Well, here’s the thing: it delivered what I promised, actually. If you remember from my initial coverage of the first two issues of this series, I predicted that this would restore balance (whoa – shades of Phantom menace there, sorry Star Wars fans) to the DC Multiversity … and it did.

By the way – spoilers ahead. Sorry, but they can’t be avoided.

First thing: I’m glad that Dan Didio finally recognized the full breadth of creative property he disposed of when DC brought about the New 52. Basically, Convergence brings a full restoration to the DC Multiversity, which is what they would have to do in the end. I’m sorry if this sounds like gloating, but I don’t often get to crow my own victories … I’m married and I’m a teacher. I want to enjoy this.

Second thing: the storytelling quality of Convergence dipped in the middle of the series. It took an about-face when Deimos was saddled with the villain moniker after Telos had his epiphany that never got fully realized. I guess we’ll wait for the one-shot history issue. The ending felt like a Hail Mary pass in the last few minutes of the game even though we knew that it had to end this way.

But let’s not overlook that if this was a way of simply making up for the appearance of the New 52, then this was a lo-o-o-o-o-ng way to go to accomplish that goal. Seriously, three years of publishing effort gone to simply restore what you removed in the first place?

So, this was the ending we wanted, but it was hardly the right way to do it. 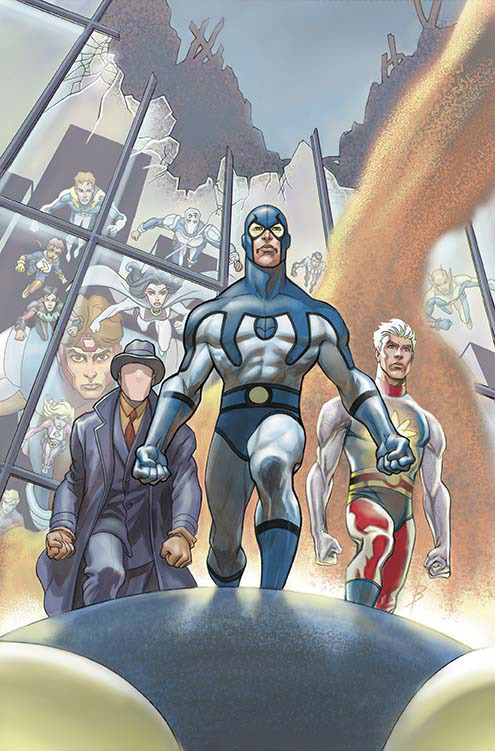 One of my favourite 1980’s heroes. Despite the taint of Convergence, I actually enjoyed this. The Question, pre-silver Captain Atom and the Blue Beetle up against the majority of the Legion of Super Heroes … and Blue Beetle does not let the readers down. This is the Ted Kord I remember: the one who used his wits, positive attitude in finding an alternate route to victory. Awesome story with some true Blue Beetle humour along for the ride. Light-hearted in its approach, but I have to say, I loved reading this book. 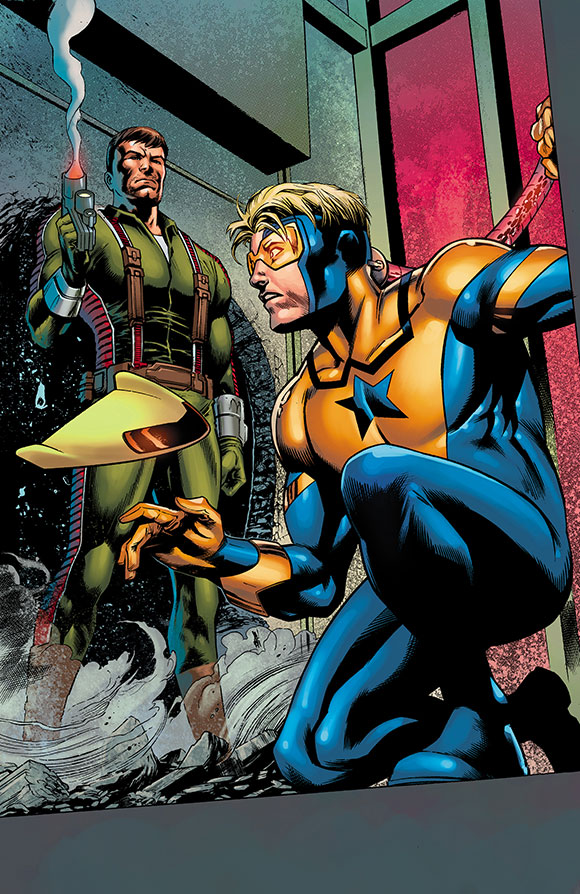 The partner of one of my favourite 1980’s heroes! So you would expect this one to be just as great as the previous title in the list.

Hate to be as vague as that, but the story jumped from the confrontation with yet another iteration of the Legion of Super Heroes to deal with Booster’s future self and this springboards more into a story that supports the main Convergence one.   So, while it wasn’t as good as a separate story, it actually reveals some important information for Convergence #8. 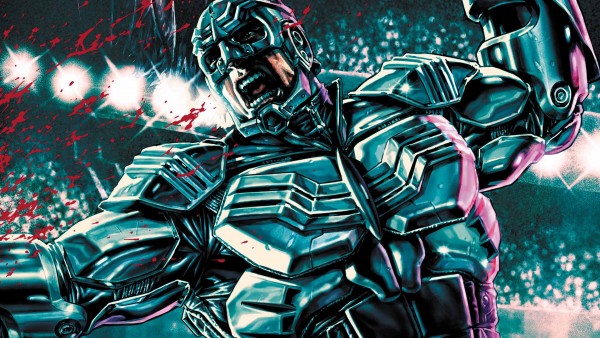 What I like about this book is the originality of the idea. The setting isn’t too far-fetched, but it is definitely a thoroughly enjoyable one. It’s always cool to imagine a destroyed future. Why? Because it serves as a reminder to us here in the present as how short-sighted we can be.

An added bonus is that the reader doesn’t have to worry about any crisis or Convergence issues. Yay Vertigo.

But damn … Lee Bermejo has created an amazing book.

Suiciders is dynamically dark. There are two worlds at work in this book – the one where people want to live and the other where people are trying to get out of. We see more of the former but from the perspectives of those who live in the latter. It’s a classic clash of have versus have-not dichotomies and framed in technologically enhanced gladiator’s arena. You’re missing out if you haven’t seen this book. 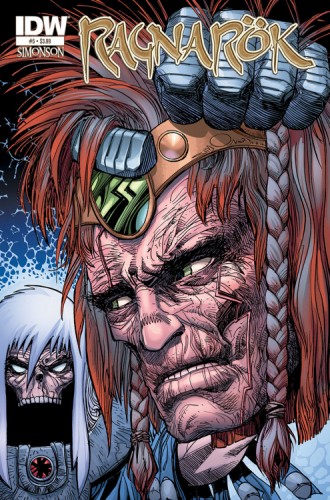 Complete with trademark Simonson onomatopoeia, this is an explosively drawn issue. Not only is there rampaging combat, but we finally see the Stone God addressed as Thor. A lot is revealed in this issue and the story pace truly accelerates at a rocketing rate. I thoroughly loved this issue and especially the cadence of the narrative, developed in true Anglo Saxon kenning format.

Unbelievably  good. I declare this to be Simonson’s magnus opus. It is an original representation of the Asgardian mythos after everything has gone to hell.

Or Hel, I suppose. 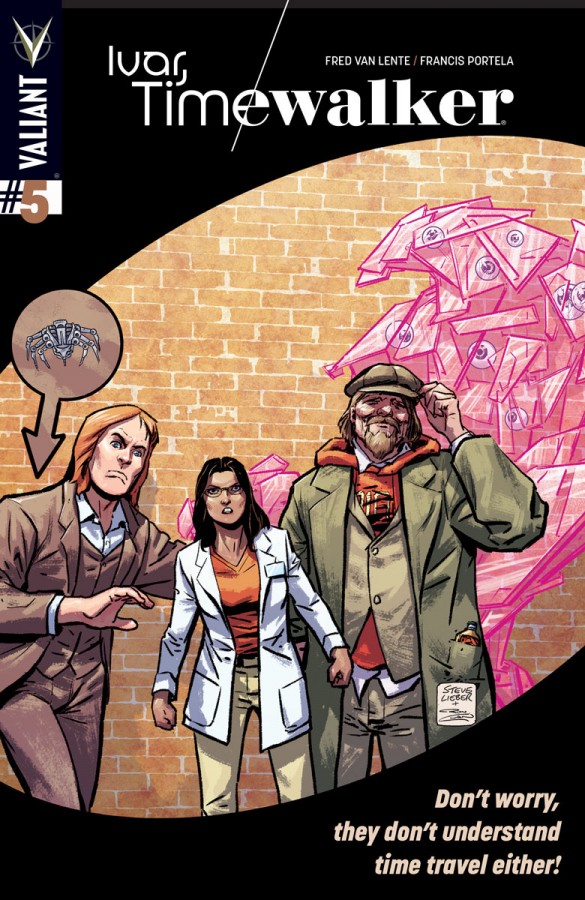 This comic makes my head hurt.

Seriously, it does. I mean, talking about pre-destination, praradox or the futility of engaging in an argument with your future self … it forces your perceptions to stretch their boundaries.

But that’s the mark of good writing. Fred Van Lente does an amazing job of delivering challenging material that makes the reader look at time travel in a totally different way. Anything that can force you to think is good, especially under 30 pages. Seeing Archer & Armstrong interact in this book is just pure fun as well. 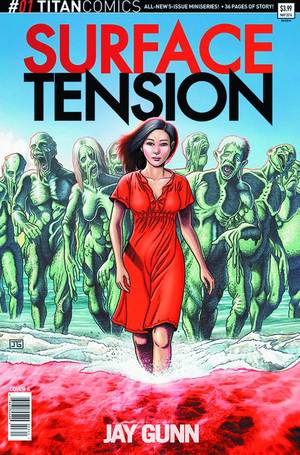 This is a creator-owned work by Jay Gunn. There’s a lot of story in this book – about 41 pages worth, if I’m not mistaken, built around a very solid premise of aliens who seem to appreciate our planet more than we do ourselves.

The story deals with the emergence of strange, coral-like towers that emerge from the sea, mutating the sea life and cutting off all sea traffic, and somehow drawing humanity into the water to merge with the ocean.

There’s a clear message in this comic of the sanctity of maintaining our environment but also one of hubris: we are not the only lifeform that matters on this world and that we are all inter-connected.

Clean art and solidly defined characters, this isn’t a bad read and definitely worth picking up. Gunn is an innovative story-teller who knows his craft. 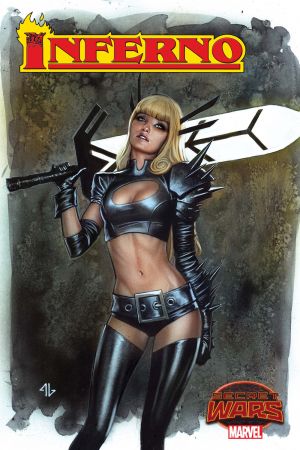 Magik has always been one of my top ten favourite characters of all time. From her initial appearance in her own mini-series written by Chris Claremont in the early 1980’s to her role as a New Mutant and then on to her present day incarnation as a fully-fledged X-Man. Even though I can’t bring myself to love the current status of my long-lamented favourite super-team, even when she appears, she still manages to get my attention.

I just hate what the soul-sword looks like these days … sigh. Change – it’s inevitable.

… But THAT is not my Illyana. Nor is that Madelyn Pryor, if we’re going on a nostalgia-fueled rant. Okay, the Battleworld context and the tank-top controversy aside, Illyana still had a vestige of humanity about her that wanted to be saved. Also, after five years of failure, even Colossus isn’t that dumb to assault the demonically transformed Manhattan-turned-Inferno.

Yeah yeah … the rant of a comic geek.

I confess, I didn’t want to like it. Plus, the Goblin Queen’s pants did NOT match her top – that’s all I’m saying about the costume top issue. Leave it as a case of bad fashion judgement. 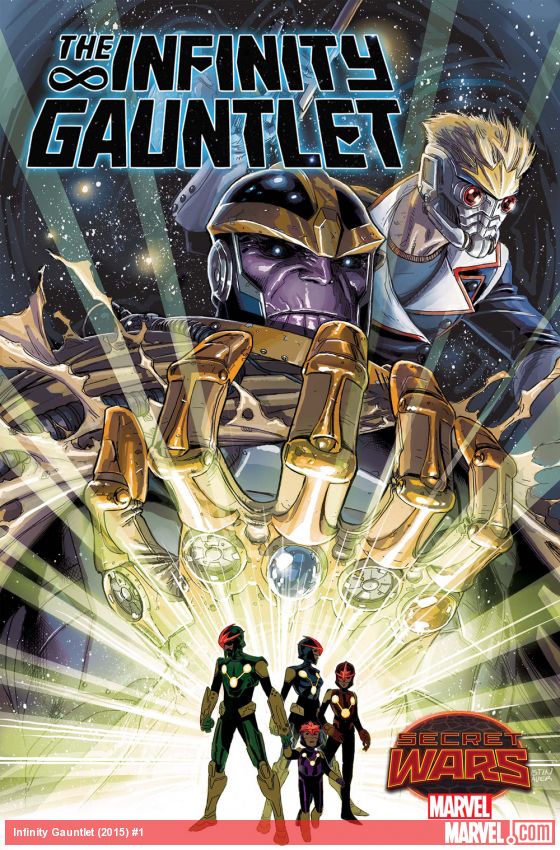 Yet another Secret Wars tie-in that capitalizes on the name recognition of the fans of my generation. I have to imagine what Jim Starlin thinks about all this.

Of course, this is a cosmic topic and I had a hard time seeing how Thanos fit into something that was primarily about Earth, albeit in all its different dimensional incarnations. Unfortunately, the first issue of this series doesn’t lend itself to any further illumination on the subject. While it was a decent story, it wasn’t a great start. Thanos doesn’t even enter into the story until the last page. So, of course, if you want to figure out more, then you have to pick up number two. 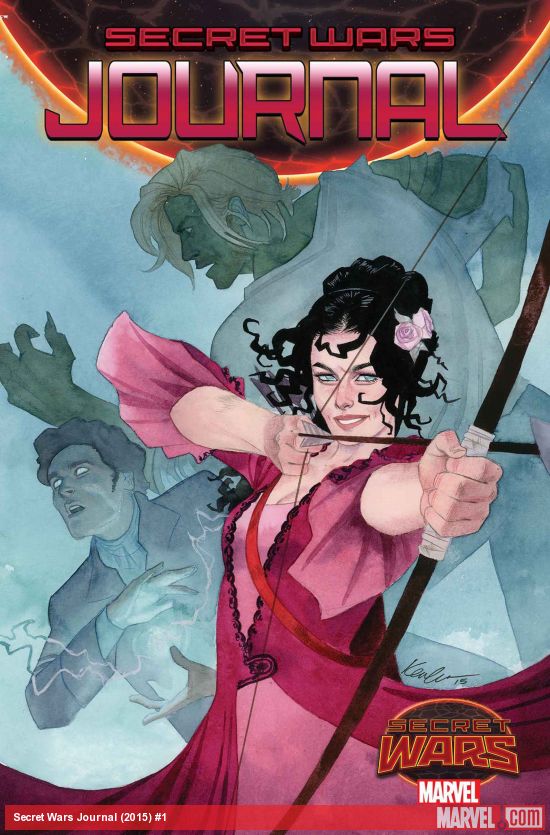 The generic nature of this title doesn’t really give you any sort of expectations. Also, the fact that there are two stories in this book makes it doubly confusing, especially since there is such an abrupt transition between them. Worse, this is set in the Marvel 1602 universe … umm, I mean battleworld, which is mismatched in itself. The 1602 universe shouldn’t exist as an actual Multiversal alternate; it’s an “otherworlds” story and should have remained so.

The problem in this is reconciling Doom as the god of this ‘verse when in 1602, Protestant Christianity was the dominant religion, Catholicism was frowned upon in England (even though King James was a former catholic who had publicly renounced Catholicism to inherit the throne). So why is Doom so easily accepted as God?

Moreover, I found the art in both stories to be very rough. Not a lot clean lines and seemed rushed. The stories were likewise rushed. The first one – with Kate Bishop’s 17th century equivalent was unfinished yet the second story – the alternate X-Men in Egyptia – seemed hurriedly put together and brief. Both struck me as little more than swollen newspaper funny strips.  Save yourself the $4.

So my pick of the week has to go to …

More happened in this issue than in the previous four. Thor’s identity is formally revealed and the weight of the events that led to Asgard’s destruction and the knowledge of the death of all of his kin finally comes crashing down on the Thunder God’s shoulders and we see the emotional toll it takes on him.

It is an immensely cathartic issue and is an example of Simonson’s best storytelling. This is a fully entertaining and unique perspective on the Asgardian mythos . It’s like giving Simonson a box of broken Norse Lego pieces and told to remake the universe with them again. It’s incredibly deconstructive and fun to see what new creations Simons is going to make for us. Given his in-depth knowledge of Norse and Anglo-Saxon literature, this should be like seeing what sort of post-apocalyptic future the Vikings would have imagined.

Simple and thoughtful: those are the criteria I started with at the beginning of this post, and that’s where it’ll end. Simonson shows his experience and mastery over a subject that is truly his area of undeniable and widely-acknowledged expertise.

Simply put, this is a book you need to have in your collection and simplicity is always best.