What do you feel when you read a good comic?

I don’t mean the knee-jerk rush to defend a comic as a medium of good literature. Back in the 60’s and 70’s, comics were under-rated as good fiction, but as the medium evolved and advanced, it gained traction as a way that well-developed storytelling could manifest. Today, it’s a foregone conclusion that this is viable and just as sophisticated as its text-dependent brethren.

But how does it make you feel?

For me, the emotional appeal of a comic is a criterion just as valuable as any of the technical stimuli that go into its creation. Comics can put you in an unexpected mood that brings a delightful surprise to the middle of the week. I experience this every Wednesday; if you’re so inclined, let’s take a look at the emotional dessert tray for this week’s selection! 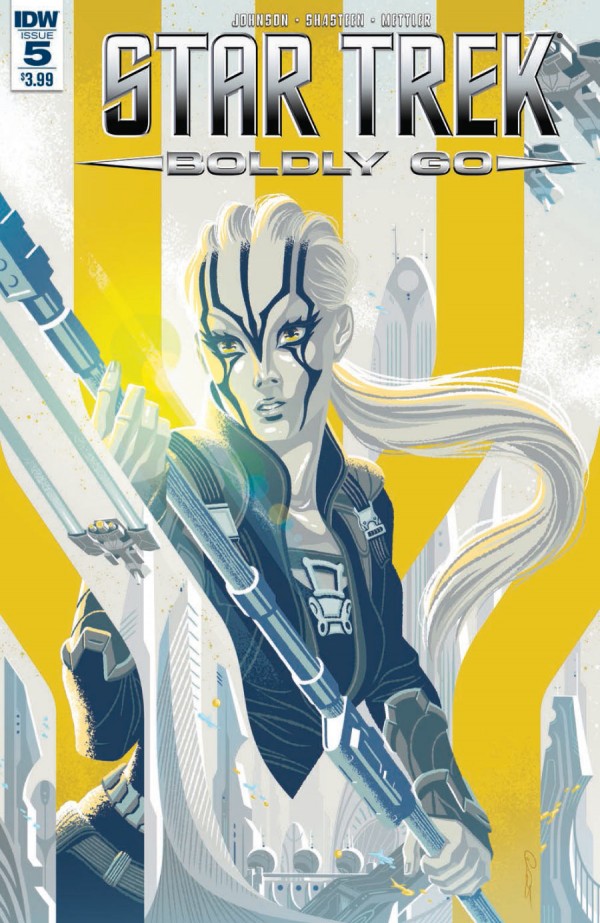 Well, it’s no surprise how much I enjoy Tony Shasteen and Mike Johnson’s work on this title. Despite my natural predilection for TOS stories, both of these wonderful creators have managed to engage (no pun intended) me in the Kelvin Timeline stories simply through exceptional talent.

This is a great filler story between issue as well. This is a brief backstory to Star Trek: Beyond’s striking character, Jaylah. Definitely a bright spot in the otherwise mildly entertaining movie, Jaylah definitely brought a level of dynamism to the film and is a good character to pick up for this comic.

Johnson and Shasteen allow us greater insight into this character’s background and set her up for more adventures in the possible future. Taking the best out of this revised franchise and making it shine even more is a striking feature of their work and it’s certainly what attracted me to it. This book gets my honourable mention for this week. 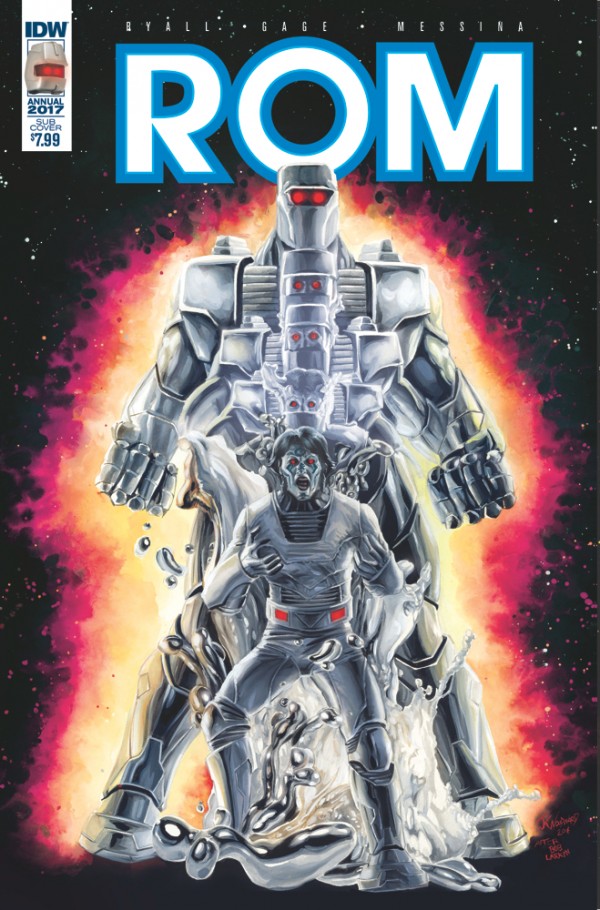 A really entertaining and detailed origin story of IDW’s revisiting of the classic 1980’s toy first created by Mattel. Chris Ryall, Christos Gage and David Messina render a very powerful story that reveals the emotional motivation behind the reason for Rom’s crusade against the Dire Wraiths.

Revenge stories are great, but so are ones that have great purpose. This story has both of these elements and while its hard for a grizzled old comic reader for me to forget the fact that this is a character based on an action figure that I used to play with as a child, it’s also very entertaining to see the origin story re-invented for a new generation of readers.

Special mention goes to J.K. Woodward for his variant cover. His art is always a joy to see, even on the variant issues. 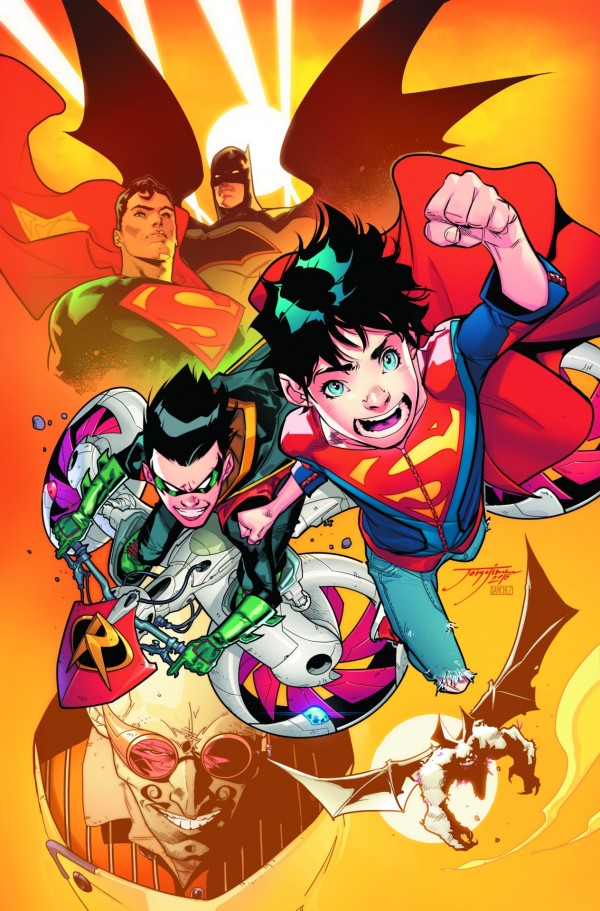 I’m not one given to fits of glee or childish wonder, but there is something about this book that evokes such a spirit of childhood adventure that surprises me, given how much I dislike the character of Damian Wayne. Still, Jon Kent is such an embryonic reminder of why the character of Superman is so appealing, that he counter-balances the offensive nature of Damian.

There’s a real sense of joy in this book that Peter J. Tomasi and Jorge Jimenez have put together for us. Maybe it’s just the cantankerous old crank in me reminiscing in the joy of being an adventurous boy, but I have to say that it’s been a while since I’ve felt any sense of boyish glee from a comic. Super Sons #1 was real throwback to that time.

Particularly when the sons of the World’s Finest wind up getting caught with their fingers in the cookie jar at the end, so to speak. You’ll see what I mean. 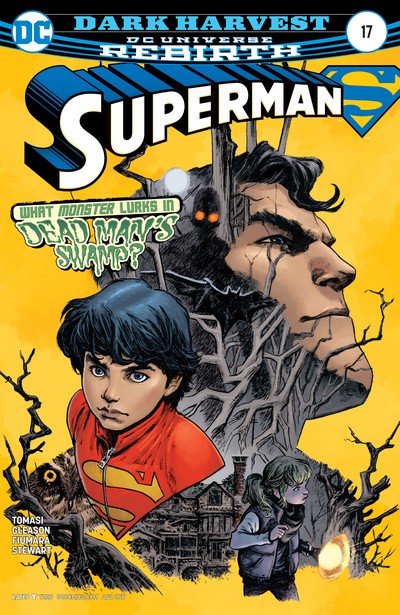 Another feel-good book, despite beginning an arc with the sinister title, “Dark Harvest”. There’s definitely a trend toward gravitating Superman back to the grass-roots, small-town origins that often get forgotten about when he’s defeating some god-like menace from another university. It’s certainly reinforced by the family dimension that the Rebirth event has introduced in this iteration of Superman, but I have to say that it adds a lot more appreciation to the character. Well, at least in my opinion.

It’s clearly Tomasi’s influence. Since he and Patrick Gleason are the writers on this one as well, and he is pulling writing duty on Super Sons – he’s definitely bringing the idealism back to Superman. However, it’s not a political one, or a highly-romanticized sense, it’s just … simple. It’s actually very similar in nature to Mark Millar’s character, Huck. It makes you want to believe in a hero simply doing his best because he genuinely wants to. You get that sense from Tomasi’s Superman and it’s very refreshing.

That comes out despite the mysterious and dark undertones to this arc.  But even this mystery is something that a young person can appreciate which adds to the audience appeal and makes this, like the above title, a real youthful joy to read. 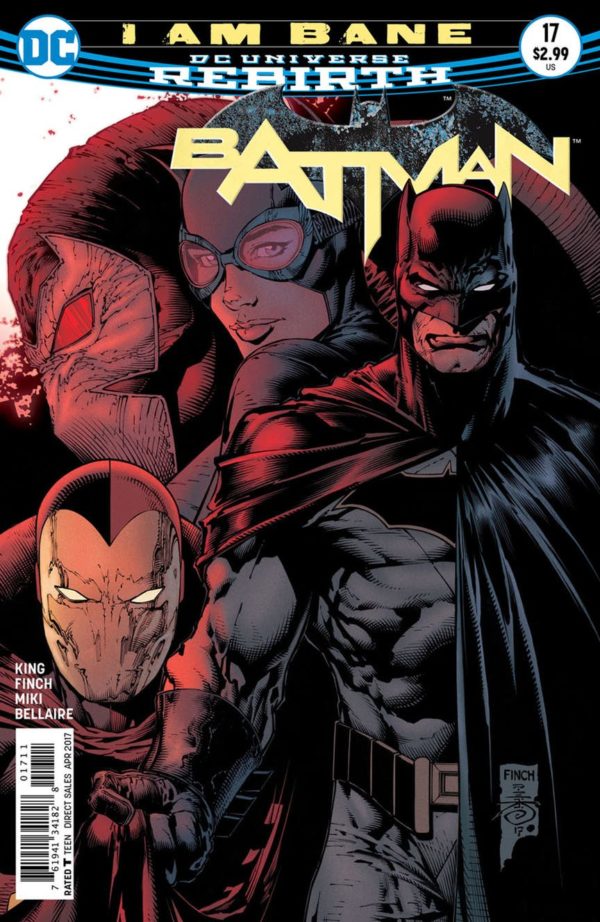 And then there’s Bane.

You know, for a character patterned after a clownish Mexican wrestler, Bane has certainly manifested himself into something a lot darker with each appearance. But it’s Tom King and David Finch who have really brought the evil to bear in this issue – and that is perfectly clear in this book.

The segmented approach to this story gives the reader that there is more happening in three page episodes than one would imagine possible. The high point in this issue is when Superman arrives at his Fortress of Solitude, lifts up the key that only he can lift and find Batman already inside. The two single words he utters in surprise: “Oh. Hello.” say volumes and the added visual effect of seeing Superman in the distance, minimalized to our perspective really convey the sense of how powerless even he is to keep Batman out of a place where he wants to go. It’s a very powerful yet subtle technique that really demands our respect.

But then, the trick is repeated again in the next stage of the story! The message is clear: if Batman wants in, then he can’t be stopped. But then, when compared to the threat that Bane represents, we see even Batman balking at the challenge before him – and that gives us pause to reflect and wonder: is this a foe that even the Batman is afraid of? But of course, this is all underlined by the need to heal Gotham Girl of her affliction as well as the need to keep the various Robins safe from Bane as well. Batman has a lot to juggle in this story and King manages to bind it all together in a wonderful and dynamic sense that keeps the reader guessing. True storytelling at its best.

I still find it weird that I am loving Batman again. Scott Snyder and Greg Capullo get the honour for bringing me back into the belfry again, but King and Finch are proving to be worthy guardians of the cowl. I’m ecstatic as I read this book and can hardly wait for the next issue, but at the same time, it’s still a bit of a surprise.

In fact, this is the choice for Pick of the Week for this time around. If it can evoke that level of excitement in me, then that’s the emotional rush I’m looking for in a comic. After all, it’s the joy you want and that reminder of why you fell in love with comics in the first place. Great art, fantastic storytelling that keeps you on the edge of your seat for twenty-odd pages and a sense of time well-spent.

Comics are waking dreams and dreams should never go unappreciated. Until next time.