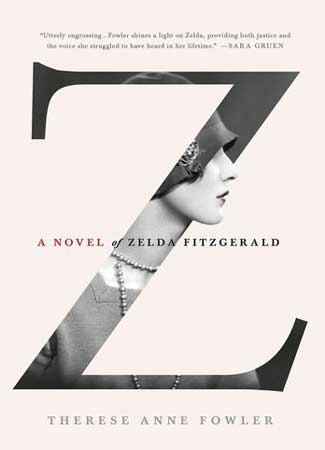 Paralleling the release of Baz Luhrmann’s film version of F. Scott Fitzgerald’s The Great Gatsby, Therese Ann Fowler has written a semi-biographical/historical novel about the other half of the notorious “Bonnie and Clyde” literary duo, Zelda Fitzgerald.  History is littered with these cyclonic relationships and resulting creative outputs, and the recounting of their paths of destruction nearly always make for an interesting studies.  The story of Zelda and Scott is no exception, as not only are the works that were produced incomparable, but they themselves were one of the most feted couples of perhaps the most rambunctious era of American history, the 1920s.

Z covers the time from Zelda and Scott’s first meeting until his death in 1940 and attempts to give a voice to her impressions, aspirations, contributions, and character failings.  The novel rightly pulls up short of the romantic feminist notion of the oppressed Zelda who wrote most of Scott’s best work, while giving fair play to her many talents and lively spirit.  What I found best about this account, though, was that I ended up with a deeper appreciation of F. Scott Fitzgerald’s novels themselves.  I have always liked them well enough, appreciated their acumen and technique, but the stark endings always made me impatient with the legitimacy of the characters’ choices.  Gatsby, The Beautiful and the Damned, all the books begin with a sense of forthcoming calamity and even the early pleasures are so obviously only a thin veneer that you wonder, why did they bother?  Z, for me, filled in that gap with vivid depictions of the wonder and seduction of the early days, when the highballs were a prop rather than a main character.

The weakest part of Fowler’s story is the depiction of the relationship between the Fitzgeralds and Ernest Hemingway.  The importance of these interactions among artistic legends, particularly during this era, is rarely emphasized adequately in the average high school/ introductory college class, but Z stretches the boundary between fact and fiction a bit too thin in this version.  I confess to not being a devotee of Hemingway, and am at a loss to explain why he seems to make a fair proportion of women snarl, but Fowler seems too insistent in her pejoratives.  I admit to smirking when she describes a scene where Hemingway tries to seduce Zelda and is rebuffed with, as she takes measure of his zeal, “Here’s another area where Scott’s got you beat.”  A likely apocryphal mash-up, this, but amusing nonetheless. However Fowler goes on to describe a lengthy campaign of increasing entanglement of Scott by Hemingway as a sort of reprisal for this clash, with a definite overtone of homosexuality.  Zelda’s jealousy of this relationship is well-documented, however Z makes the reader feel forced to render a verdict in her favor and against Hemingway. If you can overlook this bias, however, Z is well worth reading for a glimpse into the many agonies and ecstasies of the Fitzgeralds. [subscribe2]