I’ve been talking comics all weekend … so why should the rest of the week be any different?

I just finished moderating panels at Fan Expo Canada this weekend, and my particular vantage point gives me a lot of insight into the way that comic creators not only regard their work, their fans but also themselves.

There’s a lot of well-intentioned humility, camaraderie, but for the most part, an honest joy in talking about the making of comics. It’s a privilege, when you’re talking about the likes of Leonard Kirk, Donny Cates, Ed Brisson, Greg Capullo, and the always great Frank Tieri, to name a few. To work with them on panels is one thing, but to interact with them personally gives me insight into reviewing their work.

So, it’s the personal connections we’re looking for in this week’s list. Let’s get to it. 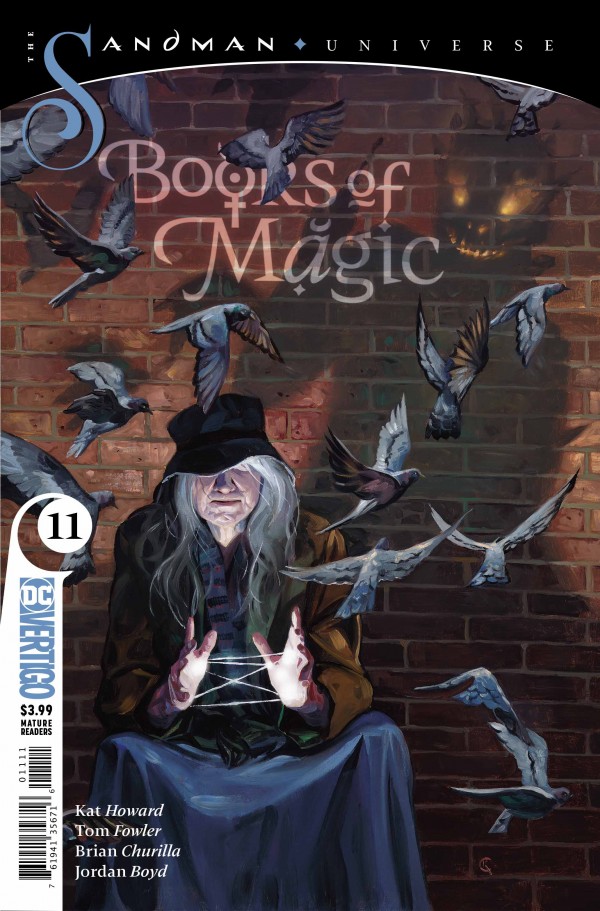 I’m still tickled by the fact that the character of Tim Hunter was originally inspired by the son of legendary comic artist, John Bolton. That’s a bit of personal insight I was lucky to have after assisting with John’s visit to Fan Expo Canada back in 2017. I was very fortunate.

In this issue, Tim Hunter is still in danger from the Cold Flame. He continues to safeguard the books of magic and they are still trying to wrest them away. In this issue, we see them planting an imposter of Tim’s long-estranged mother in his house, restoring family balance, bringing a semblance of happiness to his father.

It’s a bit of a thin issue I found. Though I am normally on board with anything Kat Fowler and Tom Howard do with this story, but in this case, I just can’t buy that Tim would willingly go along with this clear imposter. As much as he would want his mother to return to the family, it’s obvious that he knows it isn’t her.

The personal struggle between what he wants and what he sees just isn’t convincing enough. Maybe more will develop next issue, but for now, this just isn’t enough for me. 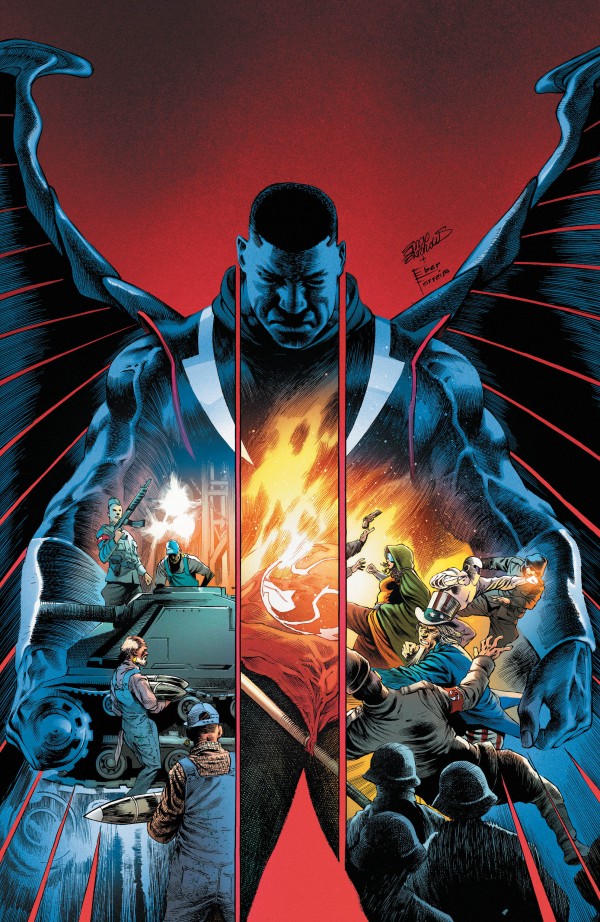 If there is something missing from the world of comic literature, it’s war comics. I was really fortunate to talk some military stories with legendary artist, Mike Grell at Fan Expo this weekend when I was running his panel. It was a great panel, and the attention to detail that came from his stint in the US Air Force was a core ingredient to his storytelling.

I like the detail that Robert Venditti and Eddy Barrows apply to this alternative earth’s Nazi-dominated 21st century. Not just in a Reich-inspired version of what America society would look like, but things like the architecture, the propaganda, and the culture. African-Americans have been relegated back to the same status they had pre-Civil War, given the Nazi concepts of racial superiority.

The Black Condor has to infiltrate Detroit, which has been transformed into a slave labour city manufacturing arms for the Reich and populated chiefly by Black workers. We get insight into his origin and when he finally discovers that there has been a trap set for him, he becomes a symbol of resistance for the workers he grew up with.

I don’t think twelve issues is enough for this story to wrap up. We are already into Issue #8 and it seems that we are running out of room for the Freedom Fighters to effectively make a difference in this alternate Earth. But I suppose if they win this battle, there’ll be plenty of war for possible other titles.

So, win this one, Messrs. Venditti and Barrows! I’d like to see more. 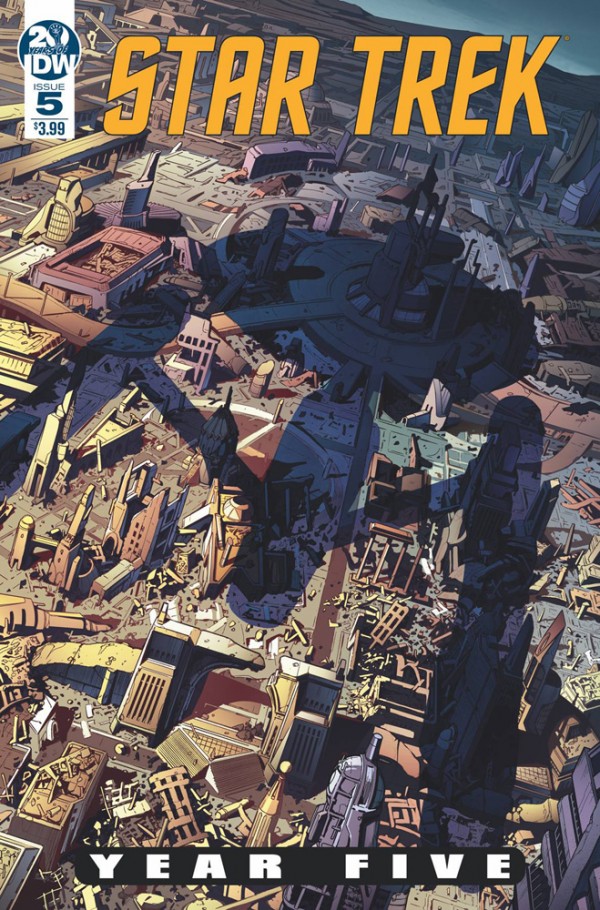 Jody Houser has definitely streamlined the storyline in this issue. She’s pared down the extra leaves and made it less complicated and easier to read. There were too many things going on in the last issue. I like that instead of following suit, Houser has kept the attention to one major plot and a minor one.

Thank you for bringing back some calm to chaos.

The story so far: Lieutenant Uhura is still trying to achieve a communications breakthrough the Tholian refugee child, but now there is an issue with recovered archeological artifacts brought back from the ruins of an ancient civilization. One of these artifacts is clearly emitting some sort of emotional effect on the crew, interfering with personal interaction and their ability to understand each other.

The story ends on a bit of a cliffhanger. But, as Houser has managed to keep the waters clear, so to speak, we are allowed the focus of mind to enjoy it.

Silvia Califano provides the art for this story and it’s very solid work. She has a gift for quirky smiles when rendering personal expressions on the characters that I quite enjoyed. It has a lot of personality and isn’t that what we’re looking for this week? Great work from these clearly very talented creators. 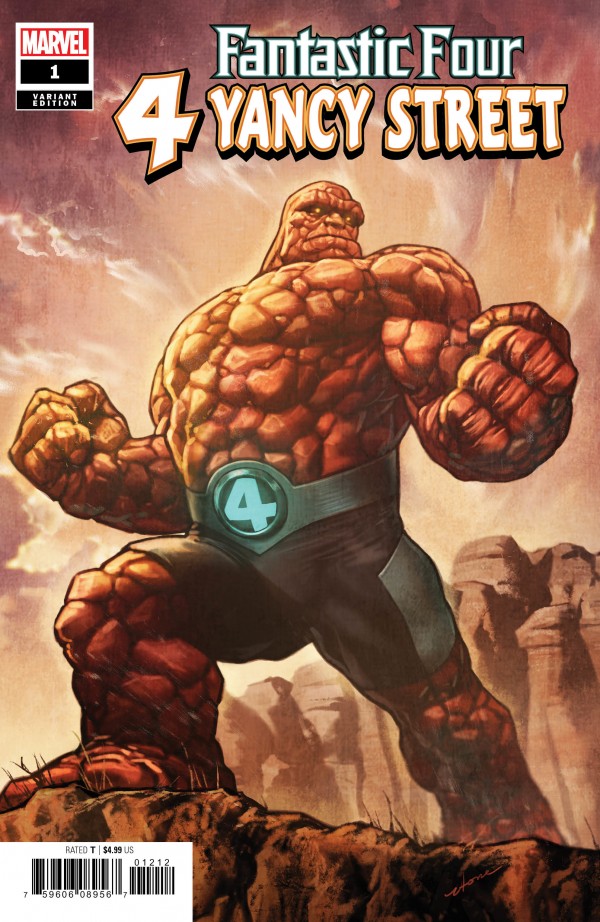 I liked this one-shot story by a veritable army of Marvel creators. Written by Gerry Duggan, the artwork is divided out to Greg Smallwood, Mark Bagley, Luciano Vecchio and Pere Perez. It’s quite a lot of people working on one project.

With the FF now living on Yancy Street, property values in the neighbourhood have doubled, causing landlords to exorbitantly increase the rent or force the tenants out for more profitable property development. Of course, they can’t fight City Hall, given that the Kingpin is in charge of City Hall.

When Ben Grimm sees the recreation centre named for his brother tagged by a teen member of the Yancy Street Gang (had to love the bit of throwback nostalgia in there), he discovers all this. Instead of punishing the kid, he tackles the problem at the source.

There’s a great theme of personal connection to the community that the FF have now called home in this book, along with a playful sense of humour at the end of the story that really restores my faith in the community of comic creators, never mind the community in the story. 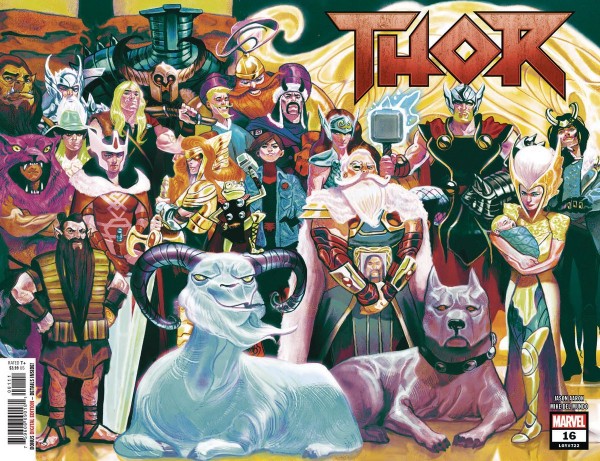 Jason Aaron and Mike Del Mundo’s swan-song issue. I needed to know that Asgard was going to be okay. Now that Thor has been recognized as the All-Father (the only logical promotion he could attain in the cosmic hierarchy of things, I suppose), his mind is set upon the rebuilding of the Realms and it’s interesting to see the transformation of Asgard from the ersatz-mythological version that Marvel used to sport. I like how Aaron has gone full-hog (or full-Nihog, as it were! Sorry, mythological joke!) on making an Asgard that works for Marvel comics, as opposed to still clinging to the previous one.

There’s no way that the schema of the Norse myths could work in today’s society. Instead of simply being seen as gods, now they are simply an advanced race of beings who now share common domain over the realms with its denizens. Humans are no longer mortals, and Trolls are no longer the enemy.

Instead, there is a sense of community and All-Father Thor sharply feels his personal sense of responsibility to them all.

This is a mature Thor and one that Jason Aaron can say goodbye to with a proud sense of accomplishment.

Good run, guys. Thanks Thor all the fun.

We often forget about the personal cost to the mundane folks around superheroes when they wage their battles for the soul of the cosmos, the safety of the planet or other conflicts that exist on levels that are beyond the scope of most mere mortals.

We start the story with a typical lower-income couple, working hard to prepare their home and a celebration for their daughter’s skating performance. While she came in second, these people still want to celebrate their kid’s achievement. They have a little party, a cake, and the dad has even taken time off work to be with his family. It’s a sweet, domestic scene spoiled by the sudden, shocking appearance of Doctor Strange, who has tracked a demon residing in their home.

You can imagine the destruction that ensues afterwards.

While someone may argue it’s a predictable story, I would counter by saying: so what? It’s these stories that bind an author closer to his audience. It reaffirms the heroic nature of the character and gives the reader a personal sense of attachment to the character.

It’s not a story that dazzles us – it’s one that keeps us close.

I’m not saying that we want this all the time, but we need to be reminded of why these people are heroes. In this day of screen gods and goddesses, an audience must be shown that these characters are not better than us, just better-abled. They still have the same sense of values of love, hate, animosity, jealousy and all those other emotions that get in the way of pursuing happiness, justice, balance – whatever they want.

They are persons of interest to us, who we can relate to in some way, shape or form.

Jesus Saiz really reinforces this idea. His art is crystal clear in portraying Stephen Strange in all his sorcerous glory, but also provides a stark contrast in presenting the Stantons as a couple one can instantly adore. These are good people and Saiz’s art really brings this home.

Home … there’s a personal notion. While trying to rid the world of this demon, Strange invades a home; the place where this family can feel safe and secure. It’s a feeling that a reader can viscerally relate to. Strange’s presence is an intrusion and it’s not natural, but because of their innate goodness, the Stantons also realize that he is trying to do something right and immediately rise to the occasion; even if their home – everything they own is falling apart all around them – they still do the right thing.

Why? Because of the personal connection that we see in this story. Waid manages convey that sense of personal attachment between the Stantons, their daughter and Strange and it works so well on a level that makes this story worthy of notice. Saiz’s visualization of a family that we can love is a collaborative joy that we also need to acknowledge.

Sometimes a doctor needs to listen to a plumber.

Doctor Strange #18 is the pick of the week for this week’s comic review and it well deserves that accolade.

I believe in the community of heroes. Fan Expo Canada 2019 always reinforces that notion of comic creators recognizing each other and reinforcing those personal connections. I see it when I moderate the panels and I enjoy seeing how the creators rally to each other and support their work.

For me? It’s the notion of being a small part of that.

Until next week, keep those close to you, closer to you.

Pick of the Week: Doctor Strange #18